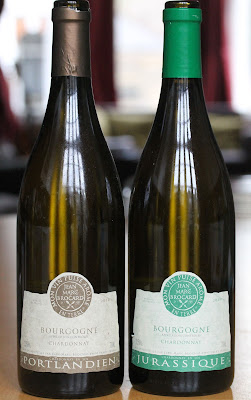 At the end of our annual summer holiday in France we go to a local supermarket to fill the car with goodies. Winewise, we might have already bought some directly from producers for laying down, but we also buy a couple of mixed cases of wines for between 3.50 and 5 Euros a bottle for everyday drinking. If you look away from classic areas to regions like southwest France, the Loire and Languedoc-Roussillon, there are plenty of bargains. Picpoul de Pinet is a particular favourite.

However, this year, in a large Carrefour in Perpignan, my head was turned by these wines from Chablis producer, Jean-Marc Brocard. They were just under 6 Euros a bottle and I grabbed the few that were left on the shelf. I can remember tasting this geologically inspired range of Bourgogne Chardonnay at the London Wine Trade Fair when they were first launched a few years ago. The range comprises 'Jurassique', 'Portlandien' and 'Kimmeridgien' named after the geological periods and soil types of Chablis. This concept really appealed to the wine geek in me – but maybe it's a bit of a challenge commercially as they aren't widely available in the UK. (However, I've just checked with Brocard's UK importer, Julian Baker, who told me that Booths are stocking Jurassique 2011 which is good to know if you live in the north of England.)

Both our wines were from the 2010 vintage and the Jurassique had a focused aromatic, citrus character, whereas the Portlandien was broader and more tropical, but still cleansing and mineral. Beautiful, elegant wines with their own distinctive personalities (and so much better than a mundane, confected tasting Mâcon-Villages we bought for the same price). Well worth looking out for if you're the other side of the Channel (or can access a branch of Booths).
Posted by Lucy Bridgers at 03:20