A recent visit to the V & A gave me a good excuse to visit some interesting sounding butchers just off Brompton Road. I'd first heard of these butchers (and got a glimpse of their gorgeous shop) on a Heston Blumenthal tv programme when he was comparing cuts of beef to create the ultimate burger.

O'Shea's specialises in beef sourced from Black Angus cattle in southwest Ireland. A vast range of steak is available, including onglet, pope's eye, the triangular picanha cut, as well as the usual classics. The beef is dry aged for between 28 and 65 days and in the shop it's fascinating seeing how the appearance of the meat changes according to the ageing. An imposing rib joint aged for 65 days looked magnificent, a world away from the bright red, watery offerings on supermarket shelves. On our visit, they had a particular speciality in stock, (rose) veal bavette. This was exquisite when we enjoyed it a couple of weekends later, well seasoned with salt and pepper and simply fried; complex, tender, enlivened by a dab of Dijon mustard and deliciously partnered by a bottle of ripe, spicy, muscular Lirac from the southern Rhône.
I also bought sausages from a broad range. Ours were Italian in style, flavoured with fennel and very tasty and meaty. I was also tempted by some lamb chops. Like the beef, this was deliciously satisfying and almost melted in the mouth. What's more, these were a decent size so we only needed one each. With a bottle of claret, this was an elegant, yet easy little supper.
A visit to this shop reminds you of what shopping really should be about – beautifully presented high quality produce and welcoming, informative staff. Really special.
O'Shea's of Knightsbridge
11 Montpelier Street
London SW7 1EX
Tel 020 7581 7771
http://www.osheasbutchers.com
Posted by Lucy Bridgers at 12:43 No comments:

La Beaugravière: an exquisite taste of the Rhône

Ever since visiting this restaurant with rooms deep in the Rhône valley, it's played on my mind in a dreamlike way. Does it really exist? Was I actually there? I still have their business card and my receipt, so I know it wasn't a dream (and I know how much it cost!).

La Beaugravière is a rare, totally genuine, unpretentious place on the outskirts of an unremarkable little town near Montélimar, about halfway down the Rhône valley. Run by a couple close to retirement age, this attractive building has a simple dining room typical of many provincial French restaurants and, certainly on my visit, three slightly shabby hotel rooms. But, to lovers of Rhône wines and regional cuisine (especially truffles when in season), it takes on a hallowed status.
I have just been reminded of La Beaugravière as, reportedly, on a recent visit to the restaurant, a particularly influential American wine critic selected some surprisingly young and modest bottles, given the extraordinary gems tenderly amassed in the cellar. As La Beaugravière has been a long-standing favourite of many Rhône producers, almost every imaginable great name and vintage is present. As I was there on a freezing cold, dark January evening (during the truffle season), not only was I able to enjoy the truffle set menu, but also some spectacular wines. We treated ourselves to Château Rayas Châteauneuf du Pâpe Blanc 1989 and Chave Hermitage 1991 which partnered the food beautifully, both bottles in immaculate condition, quietly singing in complex, mellow tones, in harmony with the deliciously fragranced, earthy food. No surprise, then, that I've been haunted by the memory ever since (and hope the owners keep postponing that retirement).
(Visited January 2004)
Restaurant La Beaugravière
RN 7, 84430 Mondragon
Tel + 33 4 90 40 82 54
http://www.beaugraviere.com (the website shows it has been spruced up since my visit) 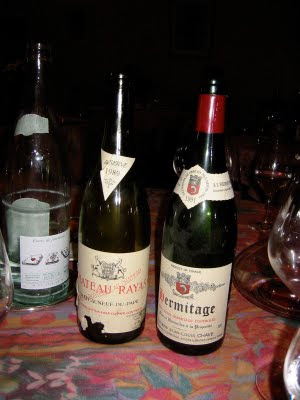 Posted by Lucy Bridgers at 14:06 No comments: