Something that recently kept me rather busy was writing a review of the latest edition of The World Atlas of Wine by Hugh Johnson and Jancis Robinson. This seminal book has been comprehensively updated and is also available as an e-book for the iPad. It was fascinating going through the book, comparing it with earlier issues and seeing how the world of wine has evolved.

Read the piece here on Fiona Beckett's Matching Food and Wine website.
Posted by Lucy Bridgers at 08:06 No comments:

Not so well preserved 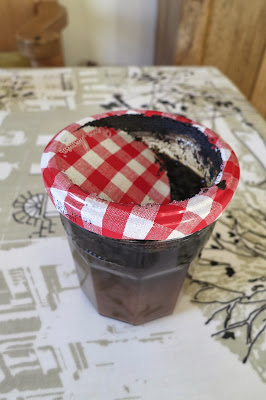 Sorting through my cupboards recently, I came across this sorry sight. It's spiced apple chutney from a couple of years ago which we're still enjoying, although after two years I'm keen to use it up. Two jars were stacked together and, trying to remove the uppermost jar, I found it was stuck to the lower one. Chutney had oozed through the lid because the vinegar had corroded the metal. Yikes! Next time, I'll be using waxed paper disks before securing the lids (and probably won't keep it for as long). Lesson learned.
Posted by Lucy Bridgers at 08:58 2 comments: 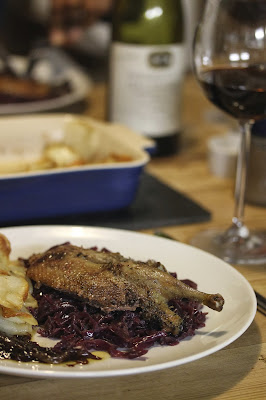 Now, this wasn't any old duck and burgundy combination as you might have guessed from the heading, this was complex, gamey mallard and a rather cherished mature Volnay. For a number of years I've been the proud owner of a bottle of Domaine de la Pousse d'Or Caillerets Clos des 60 Ouvrées 1996. We've recently moved house, so this autumn seemed a good time to open it to toast our new home. We had an old friend of mine from the wine trade round for supper, so the timing and company seemed ideal.

I've had several red burgundies from this tight, briskly acidic vintage and some of them (especially village wines) are reaching the end of their lives. However, I expected this wine from such a notable site and skilled winemaker to still be very much on song. To my relief (it always feels like Russian Roulette with mature wines), it was in full voice. 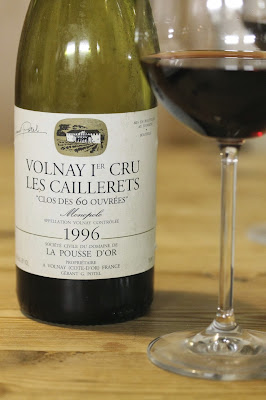 There is something quite moving about this wine. It was made by Gérard Potel, one of Burgundy's greatest recent figures, who ran the domaine until his premature death in 1997. You can read more about Domaine de la Pousse d'Or and Gérard Potel here on Clive Coates's website. It reveals that critical changes were taking place at the domaine and how stress may have contributed to Potel's early demise. So, the bottle of Volnay that had lurked in my cellar for so many years has particular poignance as it was from Potel's final vintage.

Amazingly, after 17 years, the wine was full of vigour, with a rounded silky texture, creamy and fleshy – not what I expected from this angular (even gaunt) vintage. Aromatically there was a lot going on – violets,  morello cherries, plums, exotic spice, even savoury soy notes, all supported by a refreshing chalky mineral backbone. Expressive, pure, defined and entirely harmonious. Ravishingly beautiful.

Allowing the wine to fully articulate itself, the mallard worked brilliantly. The gamey meat was complex enough in its own right, simply served with potatoes roasted in duck fat and one of my favourite vegetables for fine reds, red cabbage. An autumn treat we won't be forgetting in a hurry.
Posted by Lucy Bridgers at 05:17 No comments: