Poems on the Underground & Museum of London Docklands

As the half-term holiday comes to an end, this is the briefest mention of a couple of memorable experiences we had during the week. One is all the more moving because of the other.

On Thursday my daughter and I were on the tube on our way to meet an old friend of mine for lunch. Across the carriage from where we sat was a poem I found particularly beautiful (click on the image below to enlarge it and read it properly). 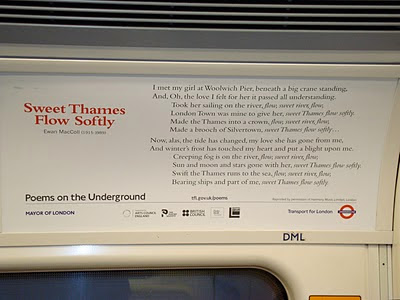 The poem was especially moving as earlier in the week we had been to the Museum of London Docklands. This is located in one of the few old warehouse buildings alongside Canary Wharf and it is a great place to take kids (and the journey can obviously include the Docklands Light Railway). It was surprisingly calm, feeling a bit undiscovered compared with other museums in London and is extremely children-friendly; it has many interactive exhibits and a large play area for the small ones to let off steam.
Entry is free of charge and there is also quite a stylish grown-up restaurant/bar which, presumably, gets overrun with cocktail-swilling office workers in the evenings. A large proportion of my family hails from the East End so, personally, I found the museum fascinating and look forward to returning with my parents. I also loved the exhibits concerning cooperage and bottling of all the drinks that came into the Port of London. A great place – really distinctive and fascinating.
Museum of London Docklands
No. 1 Warehouse
West India Quay
London E14 4AL
020 7001 9844
www.museumoflondon.org.uk/docklands
Posted by Lucy Bridgers at 13:40 2 comments:

Down in the basement of Fortnum's in Piccadilly is a (not surprisingly) rather smart wine bar. I decided to try it out while recently catching up with a girlfriend. It was a Thursday evening and we arranged to meet in the store for a quick browse before heading downstairs for a drop of wine and something to eat. Fortnum's has a real charm – glamorous, daintily proportioned and stocked with countless luxuries and delicious treats. I am particularly fond of the wine department – budget permitting. 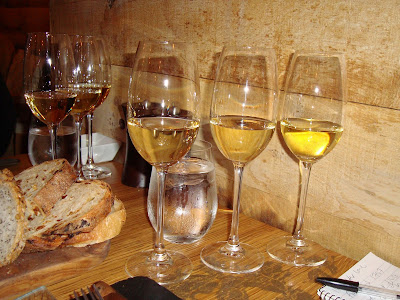 Once we were sitting comfortably in the sedate bar, manned by smooth, helpful staff, we ordered a delicious and versatile sounding flight of Chardonnay. As we weren't planning to drink much we requested a second set of glasses, so the wines could be shared between us. They each had quite distinct personalities, yet were stylish expressions of the variety: F & M Chablis 1er Cru Butteaux Vieilles Vignes 2008 (produced for Fortnum's by Domaine Louis Michel), F & M Upper Yarra 2009 Mac Forbes and Pegasus Bay 2007 (showing a lot more evolution than the others). This is one of a number of excellent looking flights of 3 x 125ml, some of which include real gems. Prices start at £12.50 for a rosé flight, rising to £18 for the white Burgundy flight. Our flight cost £16.50. Another tempting option is to select a bottle from the shop and pay £10 corkage, but the wine list does include an impressive selection by the bottle, carafe or glass. 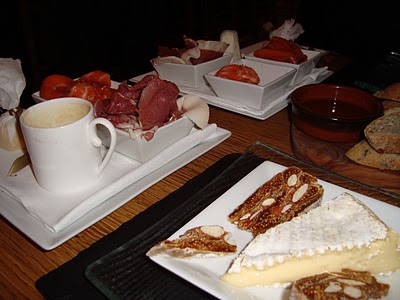 We enjoyed some tapas-like dishes from the 'dégustation' menu. The various types of cured salmon (soya and ginger: especially good), cheese served with fig and almond wheel and a velouté of coco bean and white truffle (the empty cup in the picture!) were all top-notch, although the San Daniele ham could have been more finely sliced. These are priced individually or for a selection of four (£16). We concluded our meal with some Niepoort 10 year old tawny (£8 for 50cl).

If you're in the West End and fancy a smart bit of lunch or a stylish post-shopping or pre-theatre supper, 1707 would be difficult to beat – particularly in the run up to Christmas when the shop will be at its most twinkly. Highly recommended.

Posted by Lucy Bridgers at 12:59 No comments:

If a wine were a person, who would it be and vice versa?

I recently contributed to a book in which I had to describe my most memorable wine of 2010 and the brief included suggesting a celebrity or personality to best represent the wine. This turned out to be the most difficult part of the exercise.

This has always struck me as a useful bit of shorthand to express a wine's character and style but, in practice, it's much more tricky than you'd expect. I remember the first time I heard a wine described in this way. It was a ripe, voluptuous, rather unsubtle Californian Chardonnay that was compared to Dolly Parton. Ingenious, I thought, and far more expressive than a string of pretentious-sounding adjectives that didn't mean much to most people.

When I came to make my recent comparison, it was incredibly challenging. The main problem was that the wine in question is not the most immediately appealing wine, but unfolds with layer upon layer of haunting complexity, leaving you deeply satisfied. I ended up with a shortlist of possible candidates that included actors, writers, musicians and a certain Portuguese football manager. They are all desirable men (I am a heterosexual woman – happily married, mind) and generally quite mature (reflecting the character of the wine) and none of them set out to please in a mainstream, superficial way. Some of them are quite edgy, even having psychological problems. I'm sure this all reveals too much about me and my personal tastes!

The flip side of this is the idea of coming up with a wine that represents a particular person. We're big Arsenal fans so, for example, let's take Arsène Wenger. He is mature, cerebral and uncompromising and physically quite streamlined. I can imagine a top-notch Grand Cru Chablis with bottle age and discrete oak.

On a populist level there is, of course, George Clooney. Beautifully packaged and enjoyable in so many ways, he brings to mind great quality Champagne. Krug Grande Cuvée would fit the bill perfectly – insanely glamorous, but with surprising depth and complexity. Better than Nespresso any day.

Postscript (February 2011)
The book has now been published and fellow contributors include Steven Spurrier, Simon Woods, Tom Cannavan and Richard Hemming. I won't tell you here what was my most memorable bottle of 2010 – you need to buy the book to find out for yourself but, as a teaser, the celebrity I compared it to was Alan Rickman...

Every Wine Tells A Story: a collection of the Most Memorable Bottles of 2010 to Warm the Wine Lover's Soul, as told by 29 International Wine Experts by Tara Devon O'Leary.