It's Nicer in Nice

It's Nicer in Nice – as the song from Sandy Wilson's musical The Boyfriend goes. It most certainly feels that way at the moment. After another cold February day in London I fully understand how in the 19th and early 20th centuries many privileged folk spent their winters on the French Riviera. 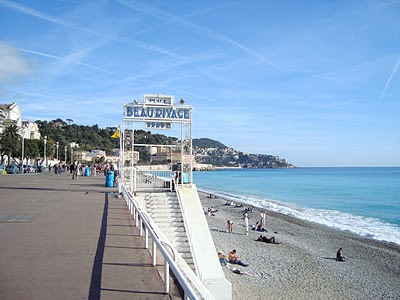 Back in November we treated ourselves to a weekend in Nice for our fifth wedding anniversary (which coincided with my birthday). Many years beforehand I had passed through Nice with my Inter-rail ticket, staying in the youth hostel and spending most of my time in neighbouring Villefranche as high-season Nice seemed too oppressive. I had just done my A levels and it was late July: too busy and sticky.

Our flight arrived at Nice-Côte d'Azur just after lunch on the Friday, having flown beyond the French coast, over the Mediterranean, before curving back to the airport that's located practically on the beach. In the glinting sunlight our descent offered us stunning views of the Cap d'Antibes to the west and broad views towards Nice and Monte Carlo to the east. Stunning. As we got off the plane, almost blinded by the strength of the light and feeling the unexpected warmth, we couldn't believe we had left cold, dreary London just a couple of hours earlier. Happy birthday Lucy!

I could ramble on at length about how impressed we were by Nice, particularly at this quieter time of year, but I'll try to put it succinctly. It is a surprisingly substantial city – the fifth largest in France (although it only formally became part of France in 1860) – and, consequently, has a lot to offer the visitor. We stayed near the old town, at the bottom of the Baie des Anges and Promenade des Anglais, just around the headland from the harbour. Our views of the coast could not have been better – along the coast, rather than straight out to sea. The picture below shows the view from the hotel's roof terrace. 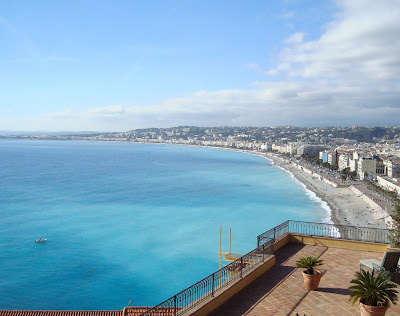 A couple of minutes' walk from our hotel (La Pérouse) was the Marché aux Fleurs in the Old Town, a glorious, bustling market fringed with bars and restaurants. This is where we had our breakfast each morning – outside watching the world go by – and memorable strolls salivating over glorious Provençal produce (check out the ceps, the figs and even the raw olives in the pics below). Perhaps it was the purity of the light, but everything seemed larger than life – bigger and more intensely coloured. What's more, I have never seen so many varieties of rose, except at New Covent Garden market with my florist mother; Grasse is only a few kilometres inland. It was perfect for picking up a few Christmas presents. 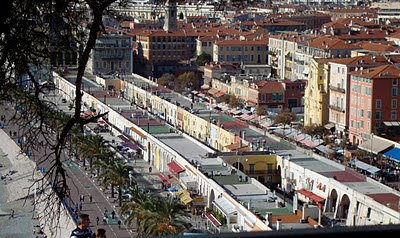 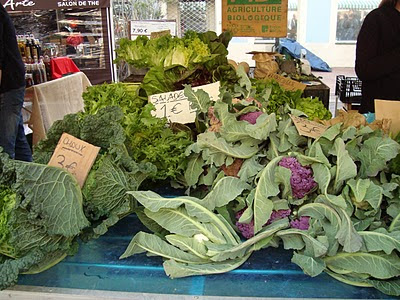 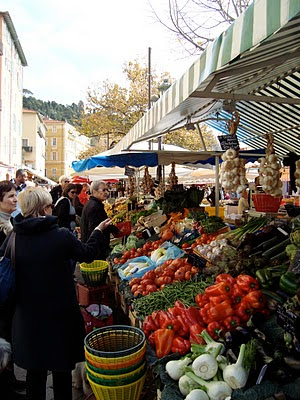 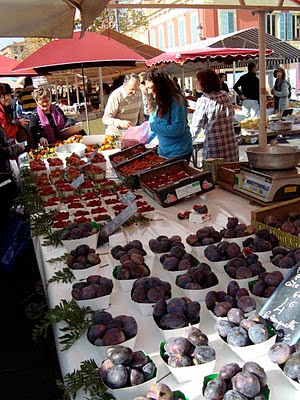 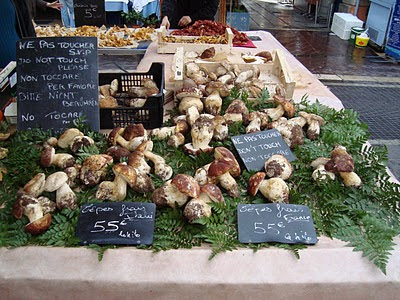 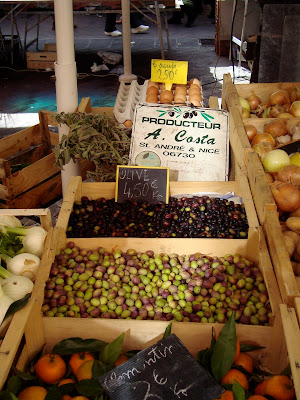 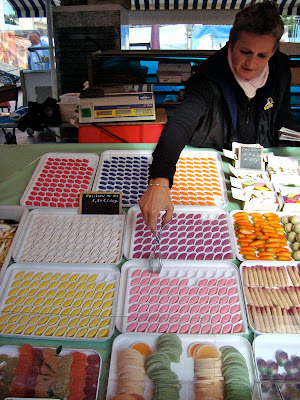 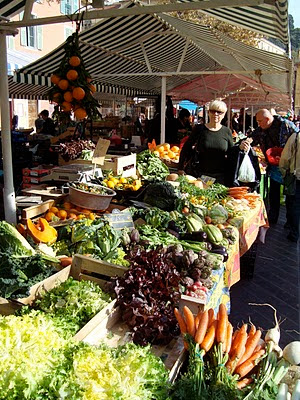 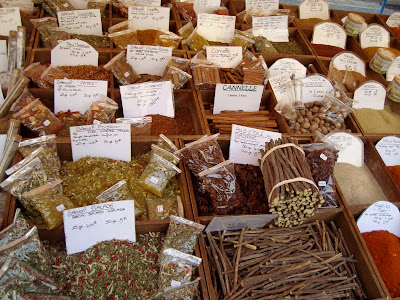 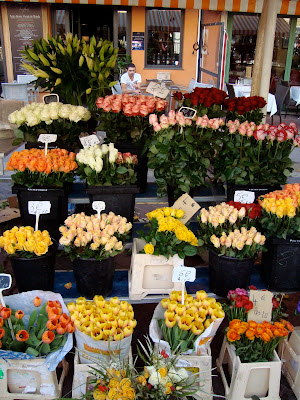 You can dine out very well in Nice, as you can in any large, varied city. On our first evening we ate close to our hotel at Créations Don Camillo on the recommendation of an old colleague from Oddbins, Rod Smith MW, now based on Riviera. We had a remarkable tasting menu with imaginatively selected wines to accompany the seasonal dishes. On the Saturday evening we had a much simpler meal of poulet roti frites in a restaurant in a pedestrianised shopping street in the New Town, a couple of blocks away from the Negresco Hotel where we spent the rest of the evening sipping Champagne, listing to some live jazz and people watching. (And strolling around the bonkers art-filled reception.) 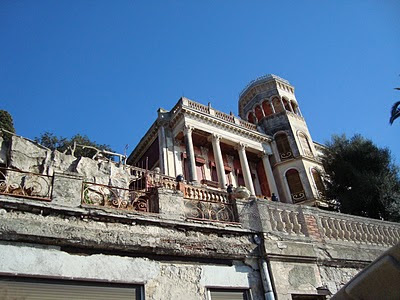 Multi-faceted Nice is well worth exploring. We enjoyed visiting the Italianate old port and arcaded Place Garibaldi, quirky Mont Boron further east with some extraordinary Gothic villas (see pic above). Inland is the 19th century suburb of Cimiez where Queen Victoria and Russian royalty regularly spent their winters; Matisse had a home here which is now a museum dedicated to him. Back down by the seafront Nice gets more Miami Beach-like with sleek Art Deco apartment blocks and, of course, the Promenade des Anglais. I hadn't realised just how satisfying Nice was on so many levels and what an infectious energy it has.

On the Sunday, just before leaving, we had some spare time and popped into the Musée d'Art Moderne et d'Art Contemporain and saw works by Yves Klein whose iconic paintings are so redolent of the Riviera and that unforgettably vivid, uplifting shade of blue. Even while we were there in mid November it took your breath away. People were sunbathing on the beach, topless even, while some were swimming in the sea. It was truly another world and an unexpectedly good out-of-season break. And not just for wintering dowagers. 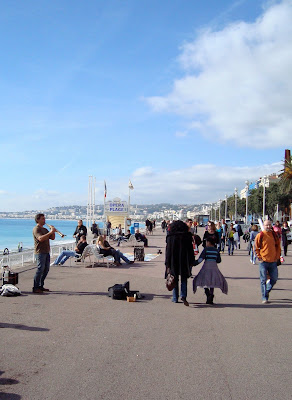 A practical note
We deliberately travelled to Nice out of season and decided against hiring a car, having been reassured about the quality of the public transport in this part of France. I am sure this enhanced our visit. If we'd been stuck in busy traffic travelling along the coast road and worrying about parking in central Nice, it would have been an entirely different experience. We used local bus services, but the rail network along the Côte d'Azur is excellent, as are the trams serving Nice. 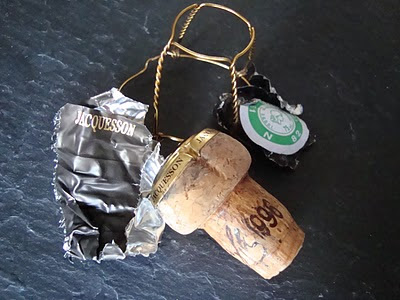 Yesterday was Valentine's Day and a good excuse to open a decent bottle. We'd had a busy day and Nathan had some DIY to do when he got back from work. However, once the chores were done I rustled up a simple supper of smoked salmon, new potatoes and a delicately dressed salad – perfect for some special fizz. 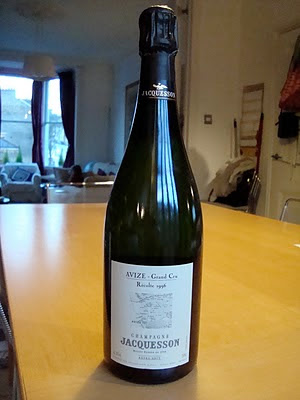 I adore great Champagne and happily avoid overpriced and disappointing Grandes Marques in favour of smaller houses and individual growers. At our wedding we served Gimonnet Premier Cru Cuis bought directly from them and I'll never forget driving towards the Côte des Blancs and seeing the dramatic ridge that boasts so many great Champagne vineyards. I hadn't realised how similar it was to the Côte de Nuits in Burgundy – another thrilling sight for a wine lover. I'll also never forget how the Champagne flowed at our wedding and how we even had several bottles left over (bliss). I'd negotiated corkage per head (rather than per bottle) with our wedding venue, Middle Temple, so there was no need to hold back. 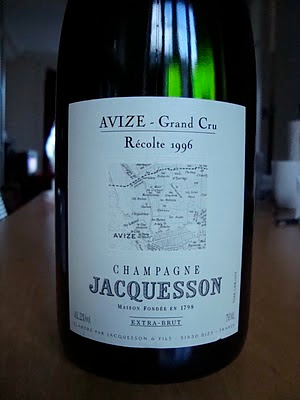 Our Valentine's bottle was also from the Côte des Blancs, but from the Grand Cru village of Avize. I'd been given this bottle as a 40th birthday present by my friend Martine Bounet who works for Fields Morris & Verdin, the importers of Jacquesson. Following her recommendations, I laid it down for a while before deciding to pop the cork yesterday. It had a deep golden yellow colour and an opulent nose of toasted brioche and caramelised tropical fruit as well and complex savoury notes. On the palate there were layers and layers of flavour, but all bone dry (extra-brut), despite the rich concentration. The finish went on and on, tangy, saline and mouthwatering. An amazing, substantial wine that stood up magnificently to the food – a superb match for the smoked salmon, cutting refreshingly through the oily richness. It may well have benefited from longer cellaring (given 1996's unusual combination of high acidity and ripe fruit), but it tasted beautifully harmonious last night. Next up will be a bottle of Krug 1988 – a wedding present that's been maturing nicely in our wine storage cabinet. Maybe for Nathan's 50th next year? We'll see... 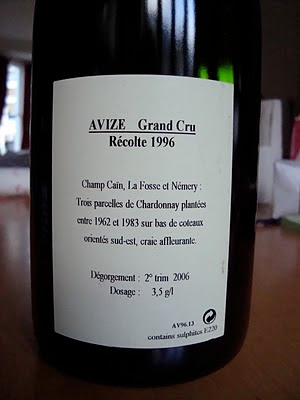 Posted by Lucy Bridgers at 05:20 No comments: 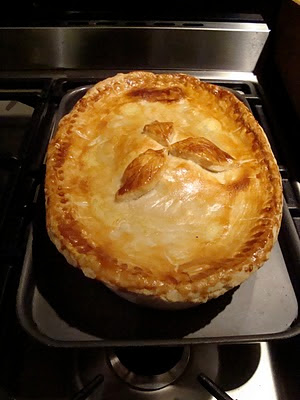 Every year I have a routine after Christmas which is to use up the leftover turkey and ham for pies to stash away in the freezer. There is something so comforting about luxuriously creamy pies and it is a great way of making sure the leftover meat stays deliciously moist and tasty. What's more, they are absolutely delicious in their own right (as opposed to just being a handy way of using up leftovers). 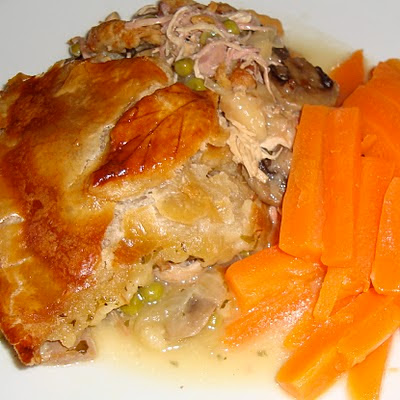 Last weekend we enjoyed the first of these pies from the freezer on a bitterly cold Sunday evening and it was so welcome. I don't bother with potatoes when serving these pies, just some vegetables on the side, so it's a very easy meal. 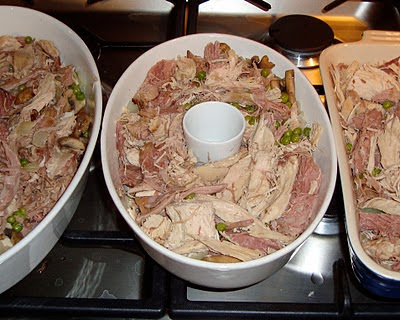 Preparing the pies, I use a generous base of turkey and ham and add some softened diced onion, fried mushrooms, peas, sometimes carrots or other vegetables (depending on how much I need to bulk out the meat). Using the pan juices, I make a creamy sauce with stock, double cream, dried tarragon and plenty of seasoning. 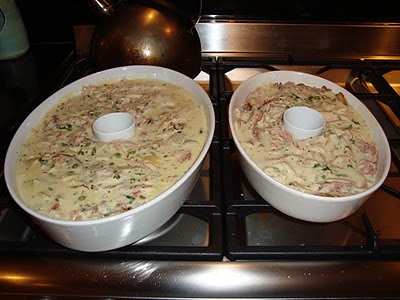 I top the pies with bought pastry – short-crust or puff depending on how I feel and what I have handy. This year it was short-crust. I like to decorate them all with pastry leaves made with the off-cuts. Then cover the pies with foil and carefully position them in the freezer. 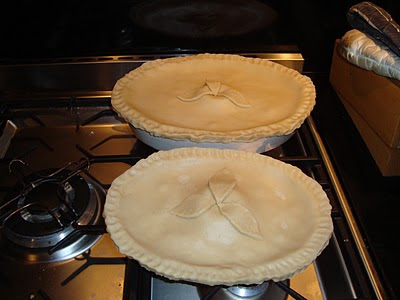 De-frost the pies before cooking. I glaze the surface with beaten egg (though not shown in pic) before cooking them at 180°C for about 30 to 40 minutes until golden brown.

Wine
Refreshing, supple reds would be good here – a particular favourite is Cabernet Franc from the Loire, such as Chinon or Saumur-Champigny. Red Burgundy would also work well, its lifted acidity balancing the richness of the dish.
Posted by Lucy Bridgers at 06:01 No comments: