Beaujolais 2011 and The Wine Society 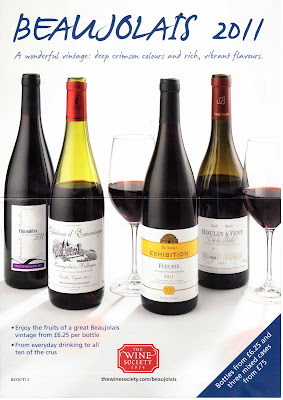 A couple of months ago I wrote about my recently reignited passion for Beaujolais, so I was delighted when a letter arrived earlier this month from The Wine Society detailing their comprehensive selection of these wines from the delicious 2011 vintage. Decent Beaujolais can be a challenge to track down, yet The Wine Society is offering more than two dozen wines, representing all 10 crus. (Berry Bros also has a good range from this vintage, but it is about half the size.)

This offer from The Wine Society reminded me why I love the organisation so much – it is a co-operative, so owned and run by its members and able, therefore, to make some interesting things available to their well informed and enthusiastic customer base. Their mailings are a pleasure to read, in this case, explaining the differences between the 10 crus, with nuggets of information such as how Chénas's name is derived from the local oak forests and that Juliénas is named after Julius Caesar (and that it's a 'perfect steak-and-chips red').

Moulin-à-Vent and Côte de Brouilly are particularly recommended from 2011, but mixed cases will also give a memorable taste of the vintage and include wines from these crus. The offer continues until Sunday 11th November while stocks last.

If you aren't yet a member yet of The Wine Society, you should join up (it costs £40 for lifetime membership). As well as an expansive and competitively priced range of wines, the Society organises regular tastings and dinners, as well as offering other benefits to members. They also have an outlet in France, so wines can be purchased at duty-free rates – handy in the run up to Christmas!

(I have to confess, I am not actually a member myself, but had the good sense to marry someone who is!)
Posted by Lucy Bridgers at 07:33 No comments: 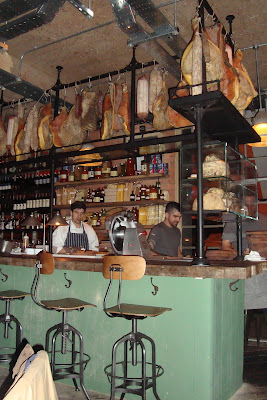 It's all happening round here. Restaurants, bars and shops are opening, pubs being done up and there's a big new French lycée (I hear as much French as English spoken at times, especially at my daughter's ballet school in Dartmouth Park). We have the dynamic Kentishtowner website keeping us updated on all things local. Tufnell Park is a Transition Town and has a weekly market and there's also a comprehensive farmers' market in Parliament Hill. However, something that's whipped people up into a frenzy is the arrival of the Soho House Group at Highgate Studios in NW5 with Pizza East, Chicken Shop and Dirty Burger.

Wary of the hype, I wasn't quite sure what to expect when a friend and I strolled over there a couple of Wednesdays ago. I guessed it would be busy and it was. Heaving, in fact. Both Pizza East and Chicken Shop (in the basement) were rammed, so we left a mobile number with each and went across the road to The Vine (recently revamped) and sipped a zesty Spanish white. After about 20 minutes, Pizza East was the first to call with a table, so we downed our drinks and legged it back across the road. It was interesting to sit down and take a good look at this Lower Manhattan-like airy industrial space and feast our eyes on all the suspended hams and jars of goodies lining the shelves. The space also boasts a large wood-fired oven and a long bar that winds around the room where it would be great to perch for a quick bite. I was tempted by the speck, mozzarella and taleggio pizza – deliciously oozy with a light puffy base – and my friend went for lasagne which she was very happy with. We also ordered a rocket, parmesan and pine nut salad which was surprisingly tasty and we loved the crunchy texture. The only negative point was that our 500ml carafe of gluggable house Sangiovese came with some silly tumblers, rather than stemmed glasses. Call me traditional, but I'd be reluctant to trade up to a smarter wine if these are the only glasses available.

Our charming, helpful (and, I must say, rather good looking) server then offered us the dessert menu and we were tempted into sharing the salted chocolate tart and figs with mascarpone and honeycomb. The tart was good, although it seemed as though the salt had just been sprinkled over the top, whereas the figs were fabulous. I recreated it at home a few days later as it was so gorgeous (although I used a roughly chopped Crunchy Bar instead of home-made honeycomb). Including the wine, our bill came to about £50. Great stuff (despite the annoying glasses).

Posted by Lucy Bridgers at 11:08 No comments:

I've been a bit quiet on the blog front recently and one of the reasons for this is that I've been attending some rather delicious events on behalf of Fiona Beckett. You can read about them on Fiona's Matching Food and Wine website by following this link. While you're there, do have a good browse around as you'll find endless mouthwatering food and drink suggestions, recipes, reviews and food and travel tips. I have some more dates in the diary, so please keep an eye out for future posts.

Posted by Lucy Bridgers at 05:13 No comments: 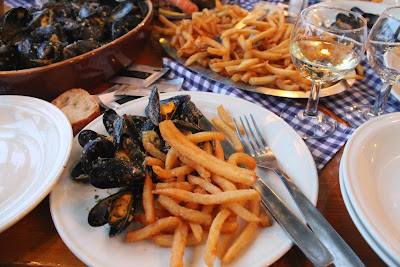 Last year I enthused about Chez Hortense, a favourite restaurant of generations of visitors to Cap Ferret. The Cap Ferret peninsular and the town of Cap Ferret itself is the kind of place that people return to year after year for their summer holidays, and Chez Hortense oozes the kind of reassuring, traditional charm that draws people back. Perched on the water's edge at the very tip (La Pointe) of Cap Ferret, and with stunning views across to the Dune de Pyla, it's rather dreamy. It ticks those fantasy French holiday boxes. (This little film on You Tube sums it up delightfully.) 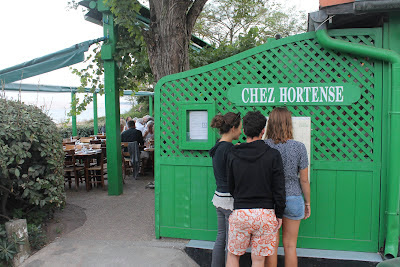 Well, I returned this summer and wasn't disappointed second time around. What's more my husband and daughter, who missed out last year, were fully in agreement, with 6-year-old Alice declaring "This is a superb restaurant!". We had a selection of dishes including some magnificent langoustines, but my favourite is their decadent mussels enriched by jambon de Bayonne and almost certainly goose or duck fat. Our reasonably priced bottle of Graves, Graville Lacoste 2010, was appetisingly fresh and zesty with all this rich seafood and kept things nicely local. 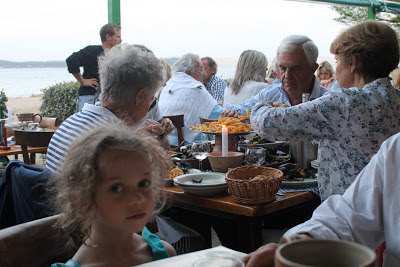 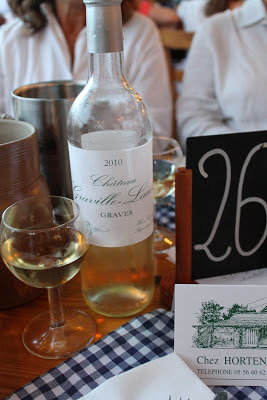 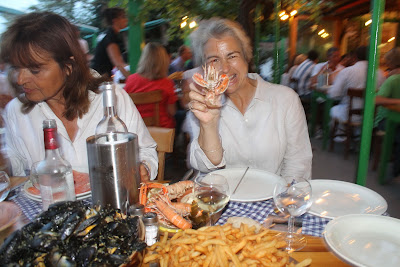 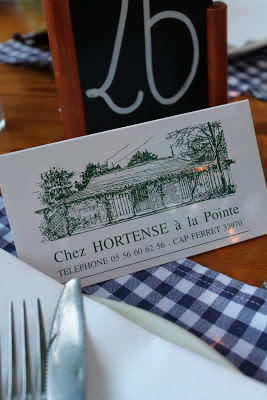 Apparently, the moules frites recipe has been a well guarded secret at Chez Hortense for several decades, but this should result in something similar:

Wash and de-beard 4 litres of mussels. Mince or finely chop 4 thick slices of Bayonne ham (prosciutto, Serrano or thick cut smoked bacon would be fine) or a skinned Toulouse sausage. Add 4 tablespoons of oil (or goose or duck fat) to a large sauté pan and briefly fry the ham, bacon or sausage with 5 crushed garlic cloves. Finely chop half a bunch of flat leaf parsley and add to the ham and garlic, along with 2 tablespoons of breadcrumbs. Leave to cook for about 10 minutes, stirring occasionally. Over a high heat, quickly cook the mussels in some white wine (about a glass) – dry white Bordeaux is the authentic choice, but any other crisp, fresh white would be good (whatever you fancy drinking with the finished dish). Once the mussels have opened up, add them and their juices to the other pan, stir well to combine everything thoroughly and serve hot – ideally with mounds of frites and a sea view.
Posted by Lucy Bridgers at 06:50 No comments:

Quo Vadis is a Soho stalwart that has always had an alluring, magnetic effect on me. Timelessly elegant and stylish, it stands out as a serenely glamorous beacon in this energetic, often chaotic neighbourhood. For several years it was Karl Marx's home, so perhaps it's the socialist in me that's drawn there.

The premises have been used as a restaurant for several decades, going through a various hands – I recall about 15 years ago, when it was part of Marco Pierre White's empire, the good enough food and some interesting Damien Hirsts on the walls. More recently, soon after it was taken over by Sam and Eddie Hart, I went with a friend and it was good. Solid, but a touch stuffy and formal. However, late last year they persuaded Jeremy Lee to move there from the Blueprint Café and things have moved into a different gear. Jeremy Lee is one of the best exponents of seasonal British cooking and has the confidence and experience to let the ingredients speak for themselves. Certainly not cheffy and fussy. What's more, the restaurant itself has had a makeover, simplifying the decor and using lighter colours that make it feel much more airy.

Since Lee's arrival, I have been twice. Firstly to a wine lunch hosted by Australia's First Families of Wine and last month I dropped in for a spontaneous supper with some girlfriends. Looking at the menu, there is so much to tempt you – I've reproduced here as I think it's such a thing of beauty. 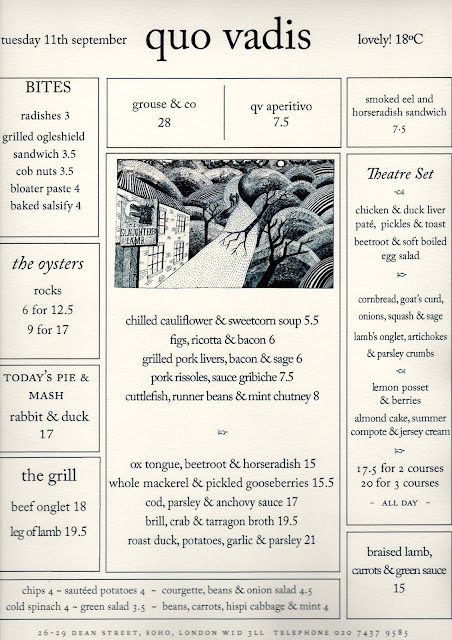 I love the design and layout, the little weather report and the clear boxes showing what's available on a particular day. It's simply, almost minimally worded – a contrast to so many overly descriptive menus. There are "bites", pie and mash, a couple of grilled meats, a braise, oysters and a few other goodies as well as the helpfully edited main menu and theatre set menu. I had the set menu which is generously available all day: beetroot and soft boiled egg salad, followed by a deliciously simple dish – lamb's onglet, artichokes and parsley crumbs. It was crunchy, juicy, earthy: very tasty and satisfying and good with our juicy and versatile Languedoc red. I finished with the almond cake – moist and just lovely with the fruit compote and cream.

I feel they get so much right here when so many places try way too hard and fail. What's more, there is a sense of goodwill that will keep people coming back. These are the kind of prices gastro pubs routinely charge, yet this is one of London's best and most distinctive restaurants. Enjoy!