A luxurious taste of Christmas 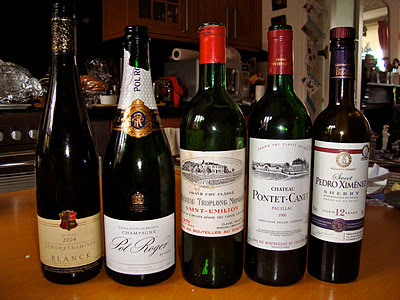 I can hardly believe how quickly the year has flown by – Christmas is upon us yet again. I'm doing some final preparations before this year's gastronomic extravaganza kicks off at the weekend and I've been reminded of some highlights from last year.

My brother celebrated his 40th early in 2010 and a couple of years earlier at The Sampler in Islington I laid my hands on some claret from his birth year. He generously decided to share it with us all at Christmas, bless him. I thought it would be fun to partner it with another claret – a comparatively youthful 1990 (although maturing nicely). A traditional, if rather cerebral choice for the turkey, but absolutely delicious – both freshly structured and beguilingly complex – and an interesting contrast to the fuller, spicier wines we often have at Christmas. Southern Rhône being a particular favourite (which we'll be having this year). The clarets topped the bill after an apéritif of ever-elegant Pol Roger, and a gently aromatic, dry Gewürztraminer from Blanck was perfect with our starter of smoked fish. We concluded with some PX – practically Christmas pudding in a bottle. Heady stuff.

Something that featured in last year's dinner was this magnificent and totally decadent stuffing. It's a recipe by Heston Blumenthal from Waitrose Kitchen magazine that includes chestnuts, cranberries, caraway seeds and brandy, sliced and fried in black butter before serving. This year I'll be preparing it in advance to take to my parents' whose turn it is to host and it'll be enjoyed alongside my (late) great-aunt's lemon and herb stuffing. Even if you're having goose, poulet fermier, a turkey crown or smaller game birds for your festive feast, this will make a memorable 'trimming'. A truly luxurious taste of Christmas.

Preheat the oven to 180°C, Gas Mark 4. Melt 250g butter in a saucepan and heat gently until it goes brown and smells nutty, then strain through a fine sieve. Set aside 175g of the strained butter.

Dice the bread slices and combine with the breadcrumbs in a large bowl.

In a small frying pan, melt 15g butter; add the onion and cook on a low heat until soft. Add the celery and remaining 15g butter and cook for 10 minutes, then add the bread mixture.

In a separate pan over a high heat cook the sausage meat in the groundnut oil until browned, breaking it into evenly sized pieces as you go. Add this to the stuffing with the chestnuts, cranberries, sage, parsley and caraway seeds, then return the pan to the heat. Pour in the brandy and boil vigorously for 1 minute so the alcohol evaporates. Scrape up any bits from the bottom of the pan.

Combine 125g of the brown butter with the chicken stock and mix with the stuffing. Season with salt.

Stir through the beaten egg (the mixture should be very moist) and spread on to a parchment-lined baking tray so that it is 1.5cm deep.

Cook in the oven for about 20 minutes, then remove and set aside until ready to serve (this can be made the day before).

Slice the stuffing into rectangles, about 5cm x 7cm. Fry in batches, using 1tbsp of the remaining brown butter for each batch, until golden all over.
Posted by Lucy Bridgers at 13:03 No comments:

Garlic – I love it and can't bear the idea of not having any handy in the kitchen. Not only does it transform dishes, but it's good for you, too, being high in Vitamin C and with properties that may help prevent heart disease and certain forms of cancer. As it's also antibacterial, it's useful for fighting colds so, as winter sets in, a warming bowl of vegetable soup, seasoned with some garlic, ginger and citrus juice will do you more good (and will certainly taste better) than the odd mug of Lemsip (which often makes me feel worse – vile stuff). You could even go the whole hog and have garlic soup. Recently in Swanage I bought some gorgeous oak smoked garlic from The Purbeck Deli. This mouthwatering shop likes to focus on local produce and the garlic came from the Isle of Wight, which, on a bright day you can see across the water from this magnificent stretch of the Jurassic Coast. Back in London some of it was included (whole cloves with skins on) in a chicken roast, but ideally I wanted to preserve it in some way. It's such a rare treat. I decided that the best way to do this was to make a garlic and anchovy butter which could be tucked away in the freezer for using to dress up steak or vegetables. It's ideal for the busy Christmas period when you might need to conjure up an impromptu supper with friends or want spoil yourself with something a bit special. This 'cheffy' detail – despite being incredibly easy – can put a dish into another league. 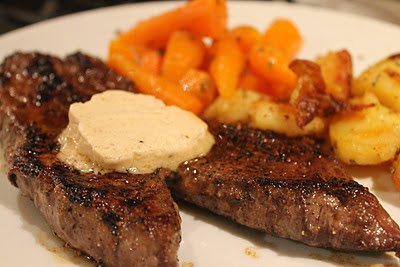 In a food processor blitz a pack of unsalted butter with the peeled cloves from a head of smoked garlic. Once smooth and creamy, add two tins of drained anchovies and continue blending. Finally season to taste with lemon juice, freshly ground black pepper and a pinch of sea sea salt (I use Maldon). Turn out, roll into a log shape and wrap generously with clingfilm. You might need to leave it in the fridge to firm up, supported on each side. Freeze and, when required, unwrap one end and slice with a hot knife (you can warm it up in a jug of boiled water – don't try to use a knife straight from the drawer as it won't pass through the hard, frozen butter). Absolutely delicious.
Posted by Lucy Bridgers at 10:38 No comments: