While it's fun to visit a newly-opened restaurant when it's still a 'hot ticket' – I'm very excited about the table I managed to book at Dinner for early May – it's also well worth holding off for a while to let a restaurant bed in and get into its stride. Les Deux Salons was one of the big openings of 2010. I'm a big fan of Arbutus, so Anthony Demetre and Will Smith's new venture had really caught my eye. I also liked the fact that it had been inspired by classic French brasseries. Looking at their website, there wasn't much on the menu I didn't really fancy.

Last week, about four months after it opened, I met up with couple of old friends there for an early evening meal – one of whom had been before and had not been overly impressed. In particular he objected to the cheeky and greedy policy, common to many London restaurants, of serving many main courses without key elements such as potatoes, obliging you to order vegetable side dishes (often bumping the price of a main course up to £20 or so). 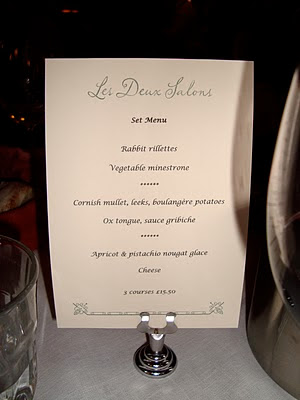 We opted for the three-course pre-theatre menu for £15.50 (two choices per course). One of my friends was running late, so we ordered on her behalf and sipped some refreshing unoaked Chilean Chardonnay, observing the gently humming, relaxed and stylish environment. Once she arrived we enjoyed our starters – my friends had minestrone soup and I had rabbit rillettes – all very tasty and well executed (and great with the wine – its acidity cutting nicely through the richness of the food).

For main course, my friends had Cornish mullet with leeks and boulangère potatoes (thumbs up from my previously critical friend). I chose ox tongue – meltingly tender with complex flavours, served with a tangy sauce gribiche. Very good. The Chardonnay was a good partner for the fish, while I had some Tempranillo from Castilla y Leon in Spain – Rioja-like mellow berry fruit and supple tannins working well with the rich meat. We rounded off the meal sharing some cheese (Pont l'Evèque was especially good) and a rather lovely apricot and pistachio nougat glace (made even lovelier by some Muscat Beaumes de Venise). We moved to the bar for coffee and to finish of the wine as, by now, we needed to vacate the table. We didn't feel rushed by the staff and we were perfectly comfortable sitting at the bar.

Including service, our bill came to £95 – good value for such decent quality in a very central spot (seconds from Trafalgar Square in a site that used to be a Pitcher and Piano). The 'theatre supper' is for orders taken between 5 and 6.30pm (Monday to Saturday) and the £15.50 menu is also available for lunch on the same days. Highly recommended, but I'm looking forward to exploring the rest of the menu on my next visit. The bavette of beef and the Barnsley chop cooked on the 'Josper' grill look particularly tempting and I'm intrigued by the snail and bacon pie starter. Soon, I hope.

Read more »
Posted by Lucy Bridgers at 12:41 No comments:

Sorry for the corny title, but after our long, harsh winter, spring certainly has sprung. Here are a few pictures taken over the past week. The first two were taken last Sunday at the Pergola and Hill Garden on the northern side of Hampstead Heath, near Golders Hill Park. This strikingly beautiful landscaped garden was originally within the grounds of Inverforth House; it is now open to the public, but feels like a secret garden. 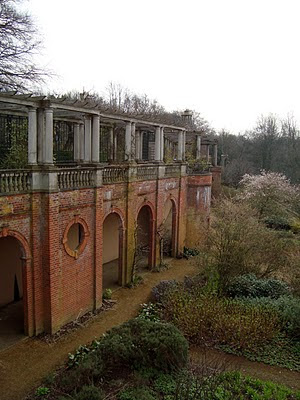 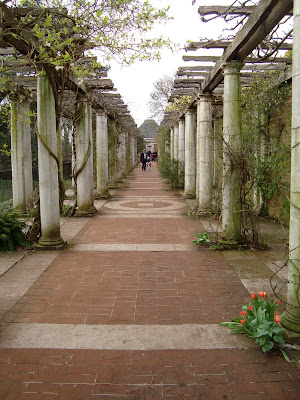 The following pictures were taken this morning on the return leg of the school run. The final picture is of one my favourite plants, white Bleeding Heart (Dicentra spectabilis 'Alba'), which seems very happy in our partially shaded garden. 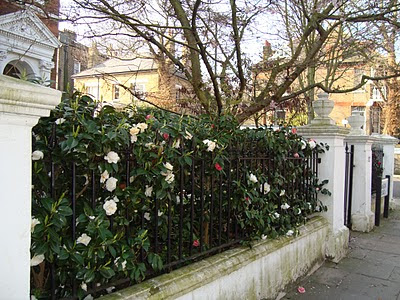 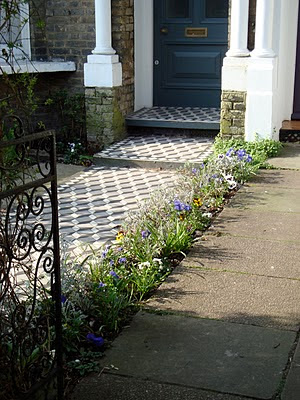 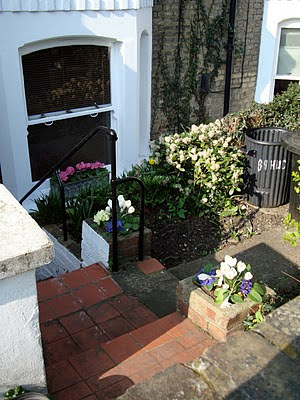 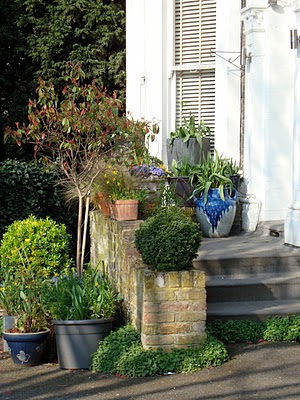 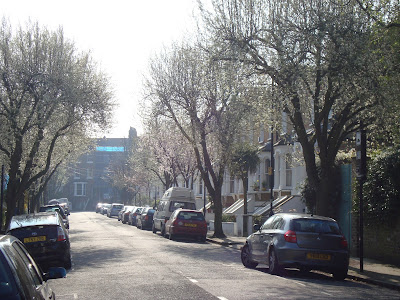 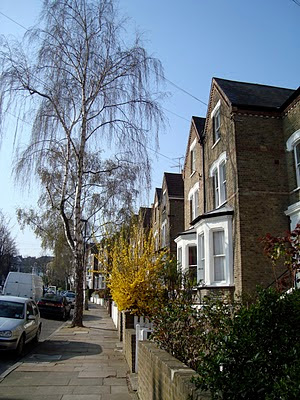 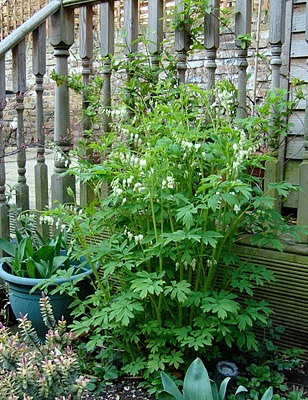 Posted by Lucy Bridgers at 13:38 No comments:

Grand and complicated: an early taste of wine

I love coming across unexpectedly great depictions of wine in popular culture. For instance, the film Withnail and I is an irreverent delight. A while ago I reproduced some deliciously detailed passages from the novel Brideshead Revisited and I am currently reading Northern Lights by Philip Pullman who, like Evelyn Waugh, is clearly quite a wine lover. The novel opens with wine centre stage in the dramatic first chapter, The Decanter of Tokay.

However, I was particularly taken by the atmospheric and eerie account (in the third chapter, Lyra's Jordan) of the young narrator's first experience of wine, while secretly exploring the College wine cellars with her friend Roger, playing Gobblers (people who kidnap children).

"...Lyra was still intent on playing Gobblers, and she inveigled Roger down into the wine cellars, which they entered by means of the Butler's spare set of keys. Together they crept through the great vaults where the College's Tokay and Canary, its Burgundy and brantwijn were lying under the cobwebs of ages. Ancient stone arches rose above them supported by pillars as thick as ten trees, irregular flagstones lay underfoot, and on all sides were ranged rack upon rack, tier upon tier, of bottles and barrels. It was fascinating. With Gobblers forgotten again, the two children tiptoed from end to end holding a candle in trembling fingers, peering into every dark corner, with a single question growing more urgent in Lyra's mind every moment: what did wine taste like?

There was an easy way of answering that. Lyra – over Roger's fervent protests – picked out the oldest, twistiest, greenest bottle she could find, and, not having anything to extract the cork with, broke it off at the neck. Huddled in the furthest corner, they sipped at the heady crimson liquid, wondering when they'd become drunk, and how they'd tell when they were. Lyra didn't like the taste much, but she had to admit how grand and complicated it was. The funniest thing was watching their two daemons, who seemed to be getting more and more muddled: falling over, giggling senselessly, and changing shape to look like gargoyles, each trying to be uglier than the other.

Finally, and almost simultaneously, they children discovered what it was like to be drunk.

'Do they like doing this?' gasped Roger, after vomiting copiously.

Posted by Lucy Bridgers at 11:33 No comments:

Let there be life: creating your own starter

Currently I have a really enjoyable work project on the go, editing a cookery book, but while I've been waiting for copy to come in, I've been doing a lot of baking. I've also been trying to create a leaven. A week on, it seems as though I may have succeeded with my leaven as it truly seems to have come to life. It is VERY exciting. 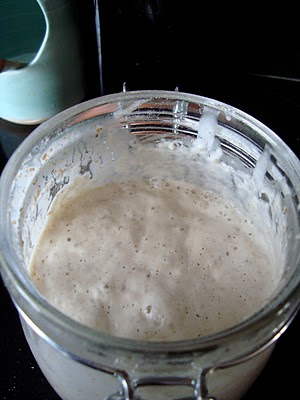 Last Tuesday, following Dan Lepard's instructions in The Handmade Loaf, I mixed together wholemeal flour, strong white flour, live yoghurt, raisins and water. The pictures below are before and after mixing (day 1) and leaving it in the sealed Kilner jar. 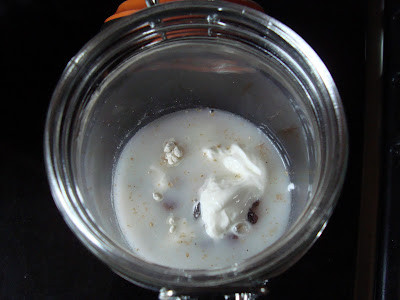 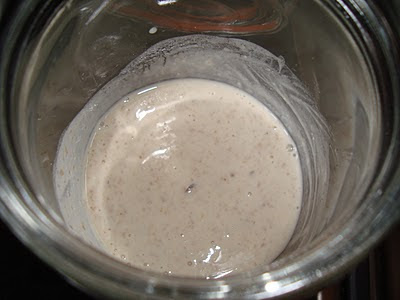 Each subsequent morning this was fed with flour and water and yesterday (day 7), after feeding it, I strained the starter and returned it to the jar. This morning I discarded three-quarters of it, fed it and, within a few hours, it sprung back to life. Earlier this afternoon, I look up from my work and saw the starter almost filling the jar, bubbling away (see below and first picture). Over the course of the week, the aroma became more acidic, yesterday it was more like fresh bread and now it's a subtle rotting apple smell. You really can't believe your eyes when you see all the activity. 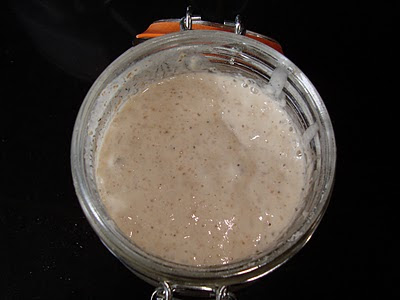 I might even be able to bake my first sourdough loaf later this week which is a particularly exciting thought. The wonder of nature! 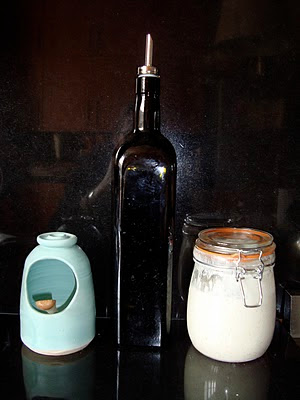 Posted by Lucy Bridgers at 07:04 No comments:

There's way too much bad bread out there. Even here in North London it's difficult to find a decent loaf without having to search out decent delis, specialist bakers or markets. And, when you do, you have to spend a pretty penny. For a number of years I've used my trusty Morphy Richards breadmaking machine to improve the quality of our bread, but I've always yearned for the satisfaction of being a proper home baker.

I've had a few attempts, but I think the yeast may have been lurking in the cupboard for too long and the results were leaden. So, this year, I have restocked the larder and plan to give home baking the time and respect it deserves. Bread is a fundamental foodstuff that humans have been making for thousands of years. It really can't be that difficult, can it?

No it isn't! What's more, thanks to the Internet, you quickly realise how many keen home bakers are out there, many offering tips, recipes and support. As a regular reader of the Guardian, I'm often drawn to Dan Lepard's recipes and, emboldened by having successfully made his Black Forest Ham Rolls (published 22 January 2011), I was ready to move on to bread proper. Last week I keyed his name into Google, along with the word 'spelt' as I've had a bag of spelt flour which has been languishing in the cupboard for too long. I came across a wonderful Anglo-Spanish blog, The Winter Guest, and an adaptation of a recipe from Lepard's book The Handmade Loaf. (I have ordered a copy, of  course.) I followed Miriam's clear instructions, using a half quantity of wholemeal spelt, but my kneading is more in line with the Lepard approach – three short kneads of about 15 seconds with 10 minutes between them, followed by 30 minutes' resting time. I baked this for the first time last Friday – and was delighted that my loaf looked just like Miriam's. As the loaf went down so well (and so quickly) over the weekend, I baked a double quantity yesterday.

I'm just warming up, though, using commercial yeast. The next step is to get much more hardcore and move on to sourdough bread...

In a large bowl mix together all the ingredients. Remove the dough from the bowl and give it a light knead on a floured surface. Return it to the bowl, cover with a slightly damp tea cloth and leave to rest for 10 minutes. 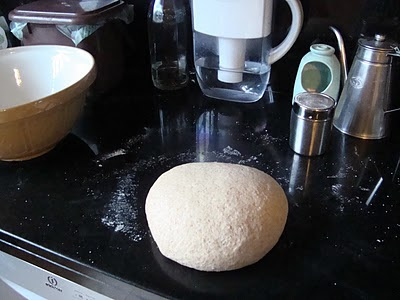 Take out of the bowl and continue kneading on an oiled (or floured) surface for 15 seconds. Wipe out the bowl and lightly oil it. 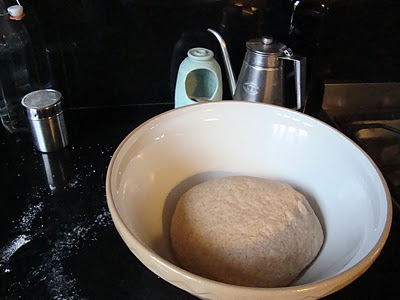 Return the dough to the bowl, cover and leave for 10 minutes. 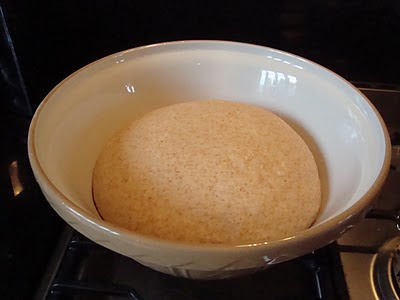 Repeat this process twice. Then leave the dough to rise in an oiled bowl, covered. In the picture above, you can see how the yeast has already started working – the dough has become silky textured and pliable. 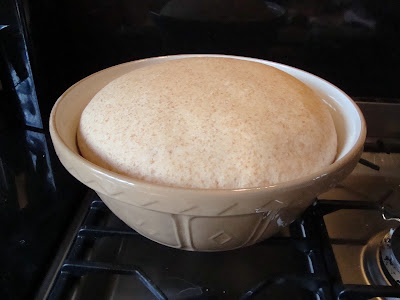 After about an hour, the dough will have risen considerably (see above), remove from the bowl and punch out the air, giving it a good bash about.

Butter and lightly flour two 2lb loaf tins. Divide the dough into four balls and place two in each tin. 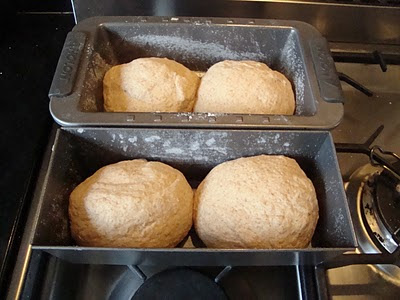 Cover the tins with the damp cloth and leave in a warm place to prove for a second time until almost doubled in size. 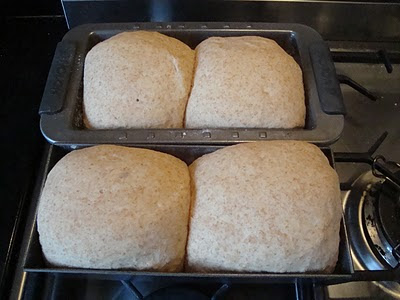 Brush the loaves with some milk and bake at 210°C for 15 minutes. Reduce the temperature to 180°C and bake for another 20 minutes. 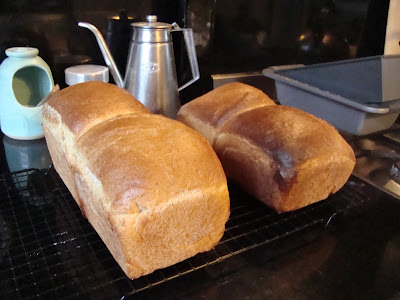 Can you see that the longer, narrower tin worked much better than the other which is better suited to loaf cakes. My preferred tin (below left) is La Forme Kaiser 2lb tin, 25cm x 11cm. The other is by Anolon and is 23cm x 13cm. 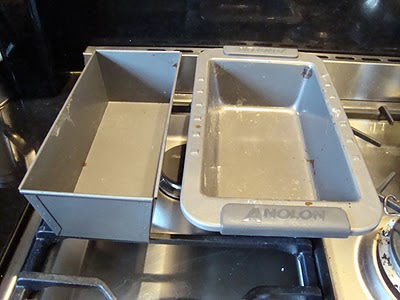 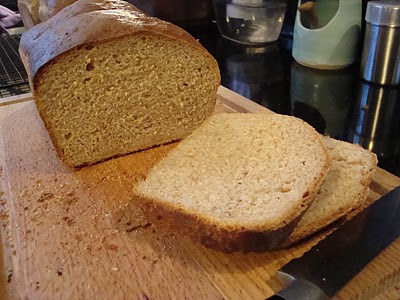 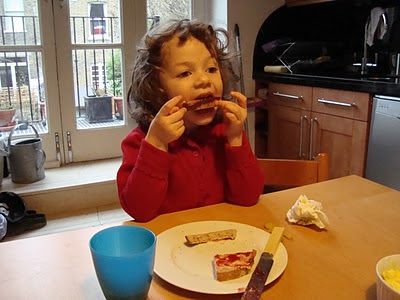