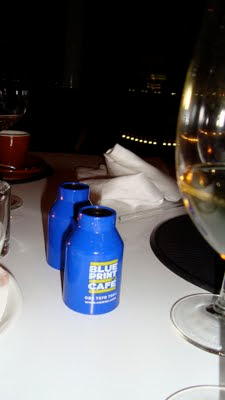 The London restaurant scene is full of big names and big egos. Jeremy Lee of the Blueprint Café does not fit these descriptions, despite being much more telegenic than the usual suspects with his wit and wealth of knowledge and the fact that he is a great chef. We were treated to him, firstly as a contestant on the Great British Menu, and then as a mentor on the same programme. He also appeared with his friend Fergus Henderson on Could You Eat an Elephant? This was great television and I wish the producers would consider another series. I had the pleasure of meeting him at the launch of a book I'd worked on. The man is a national treasure.

I've always loved the Blueprint Café where Jeremy Lee has been head chef for the past 15 years. It has a spectacular location above the Design Museum on the south bank of the Thames overlooking Tower Bridge and serves well judged, seasonal British cooking that doesn't try too hard. It is a refreshing change from many London restaurants (and those names and egos). However, I'm not averse to big names: we've recently been to Heston Blumenthal's Dinner (more to come in another post). But there are big names and there are big names. Enough said. However, Jeremy Lee does a sterling job at the Blueprint Café which remains somewhat below the radar. Press and punters alike have become too enthralled by new openings. 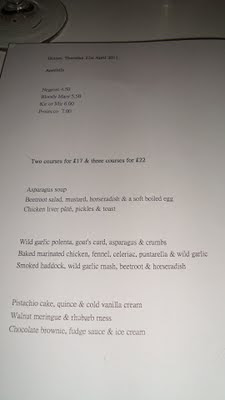 Our visit to the Blueprint Café was on a glorious, warm evening, just before Easter (Maundy Thursday, in fact, so everywhere felt demob happy). We had arranged to meet up with some friends who live in Greenwich (and who had incidentally had their first date at the restaurant and were only too happy join us there). We kicked off with Negronis and settled on the fixed-price menu, with a bottle of the aromatic, yet full-bodied southern Italian white, Falanghina to start us off wine-wise. Most of us had the beetroot salad, mustard, horseradish and soft boiled egg and my husband had chicken liver pâté, pickles and toast. Two types of beetroot were in the salad – peachy tasting golden beets, as well as the usual purple. It was an extremely tasty, seasonal dish – perhaps a bit dominated by the fiery horseradish, but an appetising start to the meal. The pâté was richly flavoured, with a satiny texture: very fine.

Our main courses were the chicken, fennel, celeriac, puntarella (a type of chicory) and wild garlic and the smoked haddock, wild garlic mash, beetroot and horseradish. Some reviews have been critical of ingredients reappearing on the Blueprint Café menu, but it didn't bother me as the restaurant is so honestly seasonal (and I love the chance to relish treats such as wild garlic). These were delicious, confident, well-flavoured dishes and a second bottle of the Falanghina went down just was well as the first.

Moving on to desserts, the walnut meringue and rhubarb mess from the fixed menu was a decadent spring pudding, if a bit messy-looking. We also had rum baba with orange and lemon curds and ice cream from the main menu, along with lemon posset and rhubarb and we shared a 250ml carafe of Monbazillac.

We concluded with coffee and fresh mint tea, with the bill coming in at about £50 a head. I hadn't been to the Blueprint Café for a few years and was delighted that it's still as solidly reliable and that the riverside view has only got more magical (although the opera glasses are a recent development).