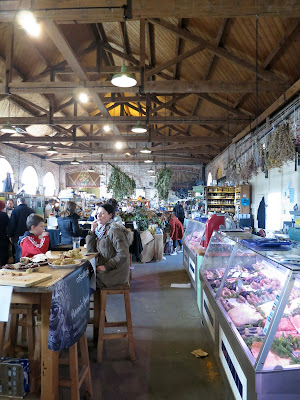 Heading to the Kent coast for Easter, we stopped off at The Goods Shed in Canterbury for lunch and, as we were self-catering, to stock up on some food. The Goods Shed, situated next to Canterbury West station (and helpfully the high speed link to St Pancras), is a comprehensive farmers market featuring an array of local produce. It also houses Clive Barlow MW's Press Wine Services and beer specialist, The Bottle Shop. As it was Easter, there was also an eye-catching and groovy selection from local chocolate maker Kate-Beth March, but there were goodies at every turn. We stocked up on local vegetables and some excellent steak, and on our return journey picked up some beautifully fresh fish for supper back home in London.

You can also eat well at The Goods Shed Restaurant or at Patrick's Kitchen where we had our lunch, encouraging us to buy our drinks elsewhere to bring back to the table. All very communal. A generous glass of Cherverny for just £3 (from Press Wine Services) was delicious with my fish soup and its gutsy rouille sauce (plenty of garlic and saffron). And it was here that daughter Alice discovered her favourite Kentish tipple, Biddenden pear juice. Apparently, only food available at The Goods Shed is cooked here. Forget disappointing department store food halls, this is what food shopping should be all about and makes Canterbury and this corner of Kent an even more tempting day trip from London. 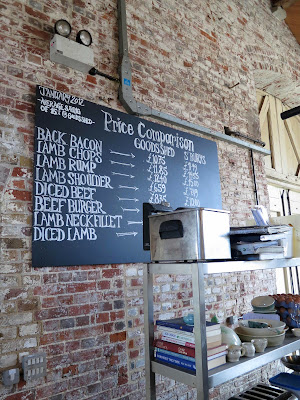 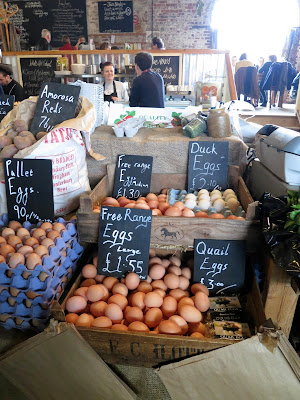 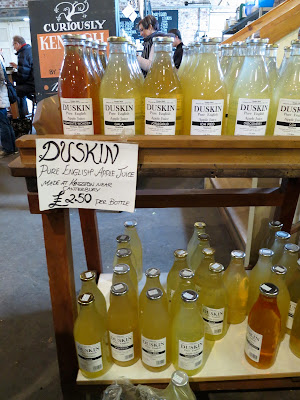 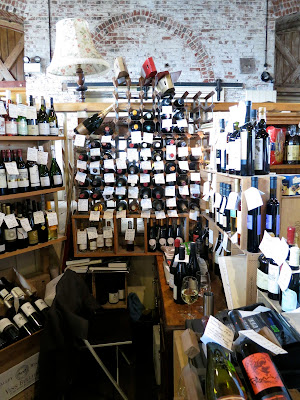 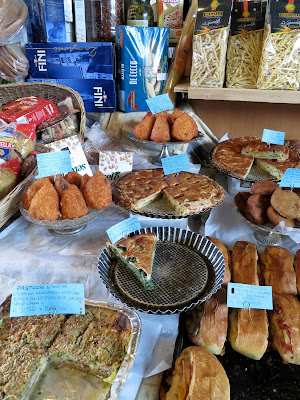 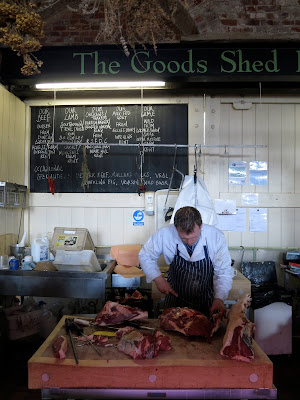 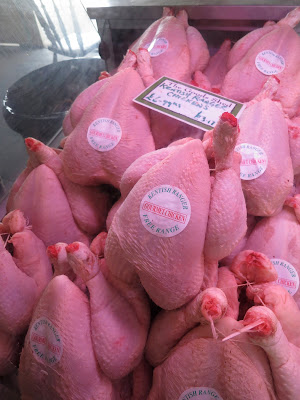 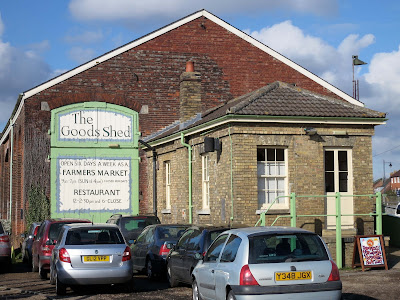 In Birmingham recently, after visiting Cadbury World on our first day, our trip unexpectedly continued its chocolatey theme on the second day. While we were exploring Birmingham we came across the Lindt Easter egg hunt which sent us on an interesting tour of the city centre, with some eye-catching things to look out for and some yummy Lindt freebies thrown in. Result! 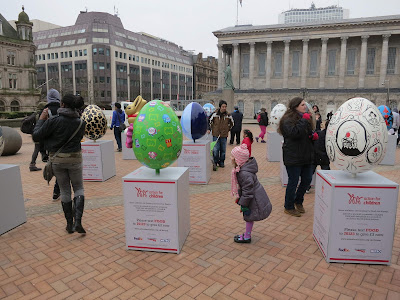 What delighted me, though, while looking out for the large decorated eggs, was spotting a little gem of a chocolate shop, Chouchoute, in Great Western Arcade close to the cathedral. Owner, Pierre Soualah trained as a traiteur at Fauchon in Paris and Selfridges in London and produces glamorous handmade chocolates with a fine, silky texture and fresh flavours that really build on the palate. I particularly liked the 'palet menthe' and 'palet bergamot' ganaches. His cerisettes and orangettes were also rather special. After the disappointment of Selfridges food hall in the Bullring, this was a really welcome discovery. 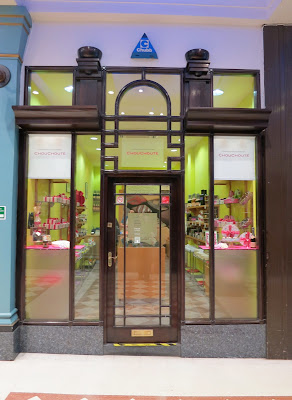 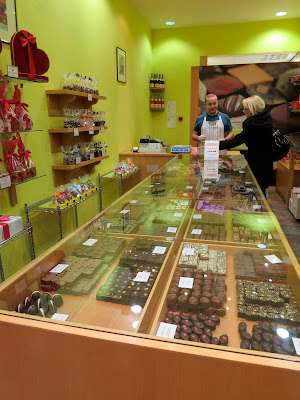 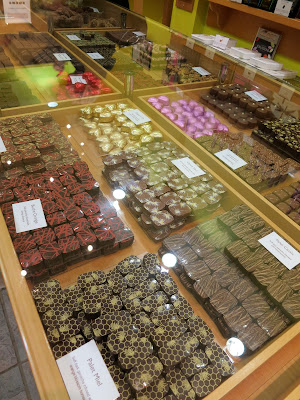 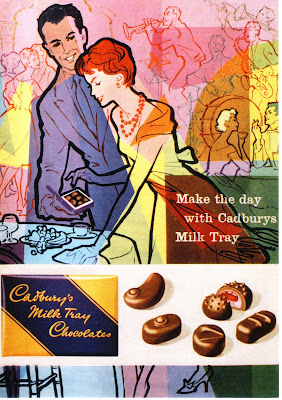 I've grown up with Cadbury's and, although they don't produce my favourite chocolate, the brand does have quite an emotional effect on me. I recently read Deborah Cadbury's revealing book The Chocolate Wars about the history of the chocolate industry and the key families involved who were in many cases Quakers (eg Rowntree, Fry, Hershey, as well as Cadbury) and committed to social welfare. The harsh irony of Kraft's takeover of Cadbury in 2010 is not lost in the book which is a fascinating read. The Cadburys, like several other powerful Victorian industrialists built model villages for their workers with the aim of improving their living conditions (think of William Lever's Port Sunlight and Titus Salt's Saltaire near Bradford) and they're attractive places to visit, particularly, if like me, you're interested in social history.

During the February half term 6 year old daughter Alice and I headed to Bournville and Cadbury World by train with an old friend and her son. We had to change at Birmingham New Street for a local train to Bournville – a bit chaotic, but once on the second train we were at our destination in a few minutes. In contrast to central Birmingham, Bournville has a sedate tranquility, and the walk from the station to Cadbury World took us past the company's offices and recreation ground (with cute half timbered pavilion). It was like strolling through a university campus. 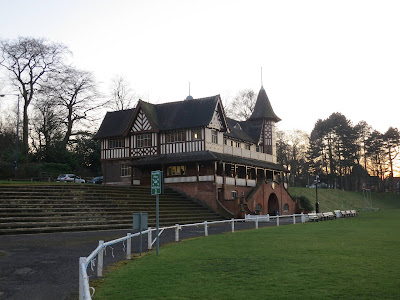 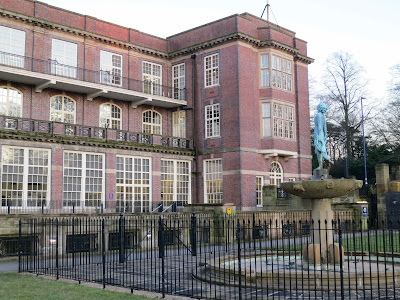 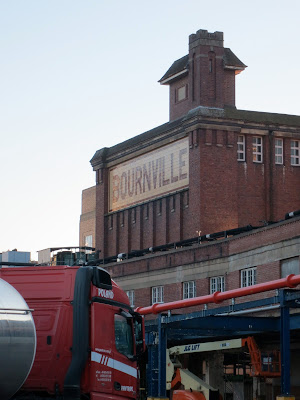 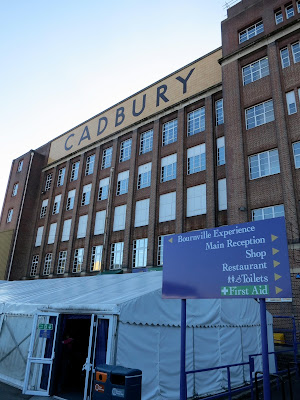 On reaching the Cadbury World visitor centre our children were able to let off steam outside in the large play area while we waited for our admission slot. The staff could not have been more friendly or helpful, explaining what to expect from your visit. Once inside, the tour explains where chocolate comes from, how chocolate and the individual products are made, as well as outlining the history of Cadbury's. It's a multi-media experience, using some high-tec devises, as well as actors physically bringing things to life. As well as it being a visitor facility, you do often see some real action as a large area within the factory is covered in the tour, although on our visit, things were a bit quiet as they were between packaging runs (but we did see some great quirky special orders awaiting collection – see the chocolate teapot below). However, there is something to appeal to children of all ages and the crowds are effectively managed throughout the tour, reducing queuing times. They hand out a lot of chocolate, too, as well as give you the chance to stock up in the shop at the end of the tour. Thankfully my daughter doesn't have much of a sweet tooth, so we've still got some complimentary Crunchy Bars and Curly Wurlies squirrelled away. 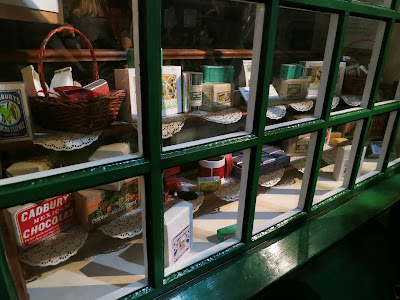 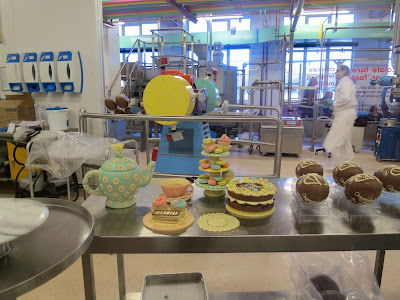 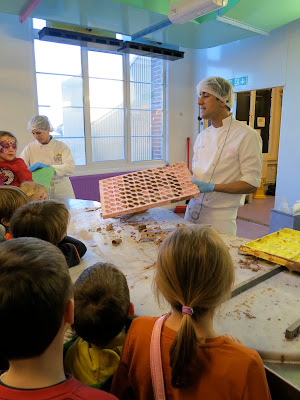 It's quite a full visit and, after three hours or so, our friends dashed off to catch the return train to London. However, Alice and I were staying overnight in Birmingham so had time to take a look at Bournville village as the sun was going down. It's a distinctively pretty place with the kind of utopian 'garden city' feel that you might expect (and quite photogenic) and offers a timely reminder of the Quaker approach to business. Cadbury might not make the best chocolate, but it's a great story. 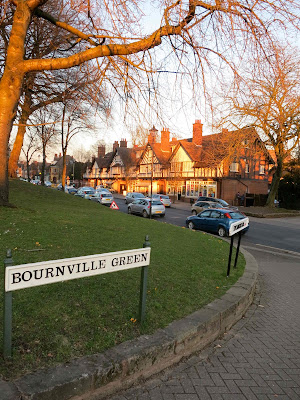 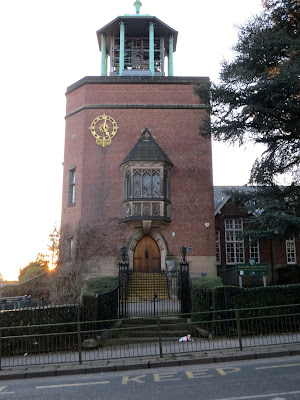