A gorgeous, eloquent glimpse of the past

I recently read Brideshead Revisited for the first time. I adore the Granada Television serial from 1981 and (now it's available on DVD) you can see what a large proportion of Evelyn Waugh's deliciously detailed observations were included in the 11 episodes. However, certain little nuggets slipped through the net. An example is this passage from the fourth chapter of the novel (in book one, Et in Arcadia Ego) when narrator, Charles Ryder, visits Sebastian Flyte at Brideshead during the long summer break at the end of their first year at Oxford.

"One day we went down to the cellars with Wilcox and saw the empty bays which had once held a vast store of wine; one transept only was used now; there the bins were well stocked some of them with vintages fifty years old.

'There's been nothing added since his Lordship went abroad,' said Wilcox. 'A lot of the old wine wants drinking up. We ought to have laid down the eighteens and twenties. I've had several letters about it from the wine merchants, but her Ladyship says to ask Lord Brideshead, and he says to ask the lawyers. That's how we get low. There's enough here for ten years at the rate it's going, but how shall we be then?'

Wilcox welcomed our interest; we had bottles brought up from every bin, and it was during those tranquil evenings with Sebastian that I first made a serious acquaintance with wine and sowed the seed of a rich harvest which was to be my stay in many barren years. We would sit, he and I, in the Painted Parlour with three bottles open on the table and three glasses before each of us; Sebastian had found a book on wine-tasting, and we followed its instructions in detail. We warmed the glass slightly at a candle, filled it a third high, swirled the wine round, nursed it in our hands, held it to the light, breathed it, sipped it, filled our mouths with it, and rolled it over the tongue, ringing it on the palate like a coin on a counter, tilted our heads back and let it trickle down the throat. Then we talked of it and nibbled Bath Oliver biscuits, and passed on to another wine; then back to the first then on to another, until all three were in circulation and the order of the glasses got confused, and we fell out over which was which, and passed the glasses to and fro between us until there were six glasses, some of them with mixed wines in them which we had filled from the wrong bottle, till we were obliged to start again with three clean glasses each, and the bottles were empty and our praise of them wilder and more exotic.
'...It is a little, shy wine like a gazelle.'
'Like a leprechaun.'
'Dappled, in a tapestry meadow.'
'Like a flute by still water.'
'...And this is a wise old wine.'
'A prophet in a cave.'
'...And this is a necklace of pearls on a white neck.'
'Like a swan.'
'Like the last unicorn.'

And we would leave the golden candlelight of the dining-room for the starlight outside and sit on the edge of the fountain, cooling our hands in the water and listening drunkenly to its splash and gurgle over the rocks.
'Ought we to be drunk every night?' Sebastian asked one morning.
'Yes, I think so.'
'I think so too.'"

Another example is when Charles Ryder's growing enthusiasm for wine is revealed in the first chapter of book two (Brideshead Deserted). While living in Paris, Ryder is taken out for dinner by Rex Mottram, Sebastian Flyte's future brother-in-law.

"I was there twenty minutes before Rex. If I had to spend an evening with him, it should, at any rate, be in my own way. I remember the dinner well – soup of oseille, a sole quite simply cooked in a white-wine sauce, a caneton à la presse, a lemon soufflé. At the last minute, fearing that the whole thing was too simple for Rex, I added caviar aux blinis. And for wine I let him give me a bottle of 1906 Montrachet, then in its prime, and, with the duck, a Clos de Bèze of 1904."

"I rejoiced in the Burgundy. It seemed a reminder that the world was an older and better place than Rex knew, that mankind in its long passion had learned another wisdom than his. By chance I met this same wine again, lunching with my wine merchant in St James's Street, in the first autumn of the war; it had softened and faded in the intervening years, but it still spoke in the pure, authentic accent of its prime, the same words of hope."
Posted by Lucy Bridgers at 13:01 No comments: 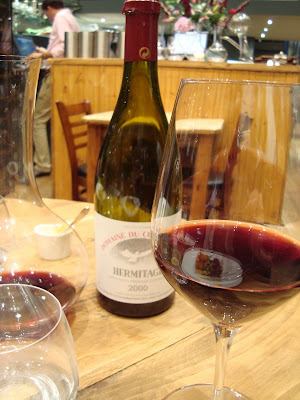 Late last year on this blog I waxed on at great length about a spectacular evening my husband and I enjoyed at Texture to celebrate our wedding anniversary. To my joy, a few months ago I was intrigued to hear that the team behind it was opening another restaurant, focusing even more so on wine. It sounded so exciting. 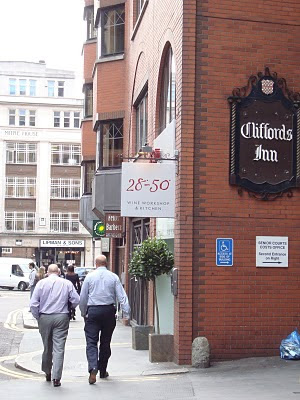 Last week I finally got the chance to experience this new venture (just off Fleet Street – see above) when I met two old wine trade friends for lunch. We had studied for the Master of Wine together (some rather more successfully than others!) and were particularly keen to take a close look at the wine list. As we had a lot of catching up to do and not a great deal of time, we played it safe by restricting our choices. We started off with Tyrrell's Vat 1 Hunter Semillon 2002 which was a mouthwateringly pithy match for the decadently rich duck rillettes. At £5 for a 75ml glass, this is a bargain for such a complex rarity. 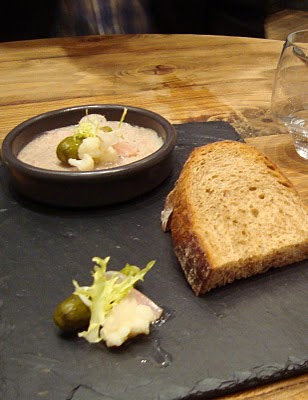 For something to accompany our main course – we were all tempted by the onglet steak – we turned to the 'Collectors List' and the Hermitage 2000 from Domaine du Colombier, another bargain at £45. This wasn't a great year in the Northern Rhône and the wine was, perhaps, just beginning to dry out, but it had enough verve and sleek structure to work beautifully with the steak. Alternatively, we could have had Château Phélan-Ségur 1999 for £59 or Grivot's Clos de Vougeot 1999 for £85. It's a treat to enjoy mature, complex wines in a restaurant at such comparatively affordable prices. 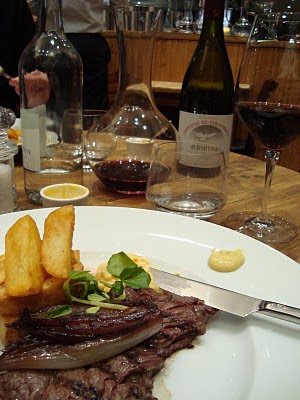 Co-owner, Xavier Rousset has developed relationships with several individual wine collectors and is able to sell mature bottles on their behalf at 28°-50° at reduced margins. It works well all round – we get to taste otherwise unavailable wines and they make space in their cellars for newer vintages. Furthermore, even for the standard wine list, Rousset's margins are small. According to Nicholas Lander in a recent piece in the Financial Times, Rousset works on an overall gross profit of 35 percent which is half the industry norm. At time when alcohol sales are falling, this could be an effective business model.

I can't wait to return and taste more of the treasures on offer and explore the menu more thoroughly. At the risk of being a bit over-the-top, 28°-50° is a great gift to wine lovers. (If you're wondering what the cryptic-sounding name refers to, it describes the latitudes between which grapevines grow most successfully.)

Read more »
Posted by Lucy Bridgers at 04:31 No comments: