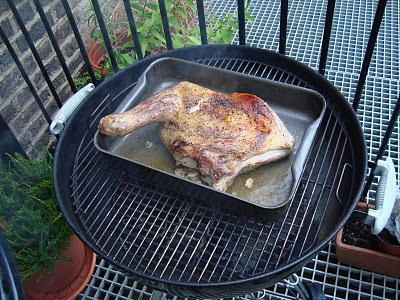 It's still August (just) and, despite all the rain last week, we are basking in glorious sunshine under clear, bright blue skies. Typical British weather! So, don’t overlook the barbie quite yet – particularly if it has a cover and can cope with the odd downpour.

Over the past few weeks we’ve been enjoying joints of meat slowly cooked on barbecues. While visiting relatives in Dorset we were treated to a butterflied leg of lamb that had been marinated overnight in red wine. This was slow-roasted in a tray, covered, on a large kettle barbecue and was beautifully tender and juicy. (You can see all the juices in the pan in the picture below and our proud host, Roy.) 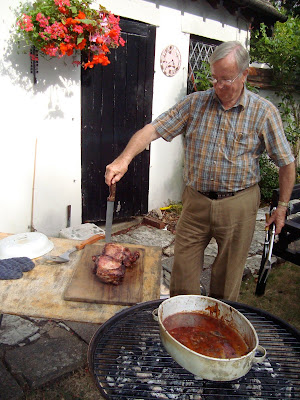 A week later, inspired by this, my husband cooked a shoulder of lamb at home on our Weber kettle barbecue, again in a roasting tray. He rubbed the lamb with rosemary, salt and pepper, sprinkled over some thinly sliced garlic and poured in a couple of glasses of white wine. The lamb spent about 20 minutes in the oven (180°C) before going on to the barbie. The coals had been arranged to the side, steeply banked, to keep the temperature low and, from time to time, the meat tray was moved away from the heat so it cooked as gently as possible, and with the lid on. After about three and a half hours the lamb had a soft, yielding texture and easily came away from the bone. The meat had the most amazingly smoky, sweet flavour and melted in the mouth. (See opening picture.) 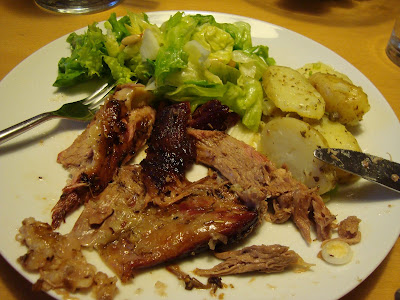 The barbecued lamb was served very simply with a potato salad that included capers and spring onions, and a refreshing green salad.
Lamb hotpot 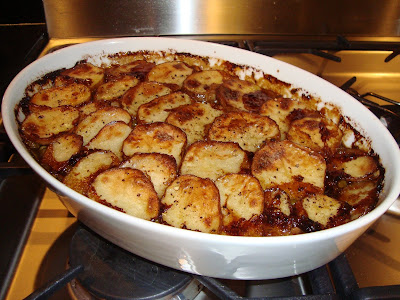 Our shoulder of lamb went an awfully long way (£15 from The Ginger Pig in Borough Market). Initially it fed four of us and gave us enough leftovers for a hotpot a few days later.
In a large frying pan I sweated a diced onion, adding sliced carrots and frozen peas. The leftover lamb was loosely shredded and went into the pan with the garlic any other remains from the barbecue pan. I poured over some chicken stock (water would be fine), shook in some Worcester sauce, gave everything a good stir and poured in some cornflour mixed with water. After seasoning generously with salt and pepper, the lamb and vegetable mixture was tipped into a baking dish and topped with sliced potatoes. A bit more seasoning and some flecks of butter finished things off and the hotpot went into the oven at 180°C for about 40 minutes until the potatoes were tender and had a good colour. 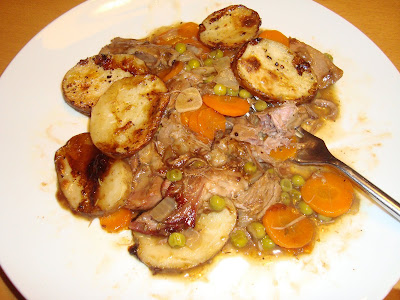 The wine we drank with the lamb shoulder (and hotpot) was one of several regional French wines we bought in a supermarket while on holiday. None of the bottles cost much more than 3.5 Euros and none has disappointed. I selected Buzet, from southwest France, as I love red Bordeaux with lamb: the aromatic blackcurrant fruit and fresh acidity works so well with the rich, fatty meat. Buzet is made with the same grape varieties, but has a more rustic style that was just the ticket. 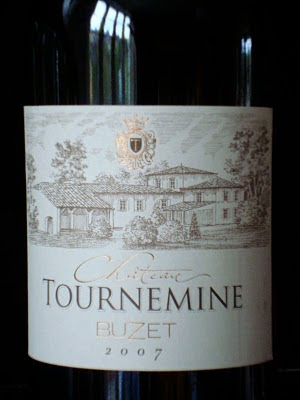 Posted by Lucy Bridgers at 13:28 No comments: 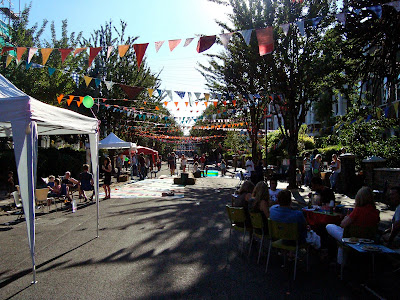 This certainly falls into the ‘other pleasures’ category of this blog, although quite a lot of wine and food was also involved.
I’ve spent all my adult life in London and it’s a fallacy that people are unfriendly and that your neighbours are strangers. If that’s what you want, fine, but it needn’t be the case. I’ve always been able to get involved with local residents’ associations and organisations and the concept of community is very important to me. It enrichens your life and gives you a much greater sense of security. Being neighbourly needn’t mean living in each others’ pockets, but a smile or ‘hello’ in the street goes a long way, let alone the comfort of having people nearby who keep an eye on your home while you’re away.
When friends in a neighbouring street told me that a street-party was taking place, I couldn’t resist going along. They were happy to include non-residents as long as they contributed to the buffet. It was one of a number of events taking place around the country as part of The Big Lunch initiative to promote community cohesion. St George’s Avenue is already quite well versed in this way as for several years they have held street-parties on St George’s Day. 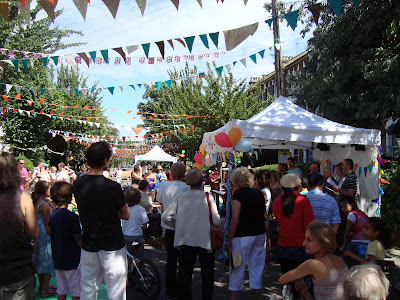 The Big Lunch street-party took place on Sunday 18th July – a perfect summer’s day and the bunting festooned street looked idyllic in the dappled sunlight. There was some excitement and media presence early in the morning as London Mayor, Boris Johnson, made an appearance to kick off proceedings, joined by Barbara Windsor to judge the children’s cake competition. Once the press had departed, the event unfolded in a calm, relaxed fashion, with many local residents eating, drinking and enjoying the day. 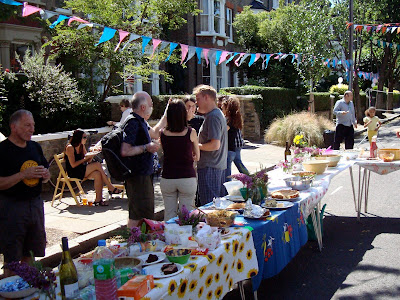 The atmosphere could not have been more convivial (although a pleasant drip-feed of wine may have influenced my take on things). Children ran around in the sunshine, playing in the padding pool and sandpit in a completely traffic-free road. The Yerbury School parents’ choir sang their hearts out, a local magician entertained the crowd and a talented young schoolboy took over on the piano; there was even a Thai Chi demonstration (very North London). 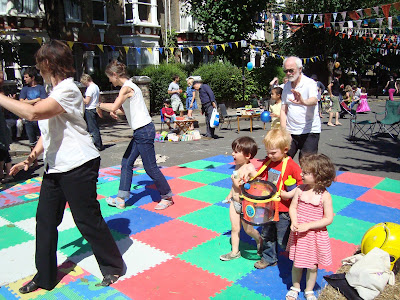 A good number of people mucked in at the end of the day to tidy up and return the street to its normal state. However, the bunting remained up for a few days as if to reassure people that it hadn’t all been a dream.

http://www.stgeorgesavenue.org.uk/
Posted by Lucy Bridgers at 02:16 No comments:

Grape 'n' Grain in Frome: a treasure-trove for wine lovers

A couple of weeks ago my daughter and I were staying with friends in Frome in Somerset and, while supper was being prepared, I popped out to the local offie for a bottle. My friends had said it was quite a good wine shop and that the owner sourced a lot of wine on his travels. I wasn’t expecting much, though, especially with the name ‘Grape ‘n’ Grain’.

It looked quite innocuous from the outside – a regular-looking shop, well-stocked shelves, a couple of chaotic fridges. I stepped inside and realised there weren’t many branded wines (always a good sign), but when I went through to the back of the shop I came upon a treasure-trove of enticing old bottles. There were mainly French classics, as well as some quirkier Port and Madeira. Apparently, the owner of this well-established and popular offie, Jack Sudders, has a range of business interests and is able to pick bankrupt stock to sell in his shop.
If you’re in the area it would be well worth dropping by to see what’s currently available. Sadly, that evening I wasn’t in the market for a mature classed-growth, but my bottle of Picpoul de Pinet was delicious with our seafood rissoto. I will definitely be back for a proper root around before too long.
Grape ‘n’ Grain
6a Badcox
Frome
Somerset
BA11 3BQ
Tel 01373 462455
Posted by Lucy Bridgers at 04:12 2 comments: 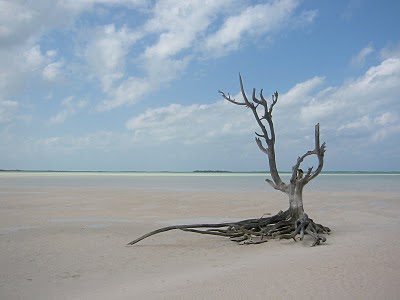 Today I'm having a dry day so, as I write this, I’m sipping some San Pellegrino just ahead of eating my dinner. Normally I’m happy to have a glass of filtered water from the Brita jug but, for me, the San Pell is a treat. I love its subtle salty tang – appetising, satisfying and a much better partner for food.

During the spell of sweltering hot weather earlier in the summer, what I craved more than anything at the end of a long sticky day was some chilled, saline dry sherry. Ideally Manzanilla, but fresh-as-a-daisy Fino was fine. It then struck me that it wasn’t just my love of salt that provoked this desire. I remembered how much I enjoyed drinking margaritas on holiday in Mexico several years ago – the combination of lime and salt is irresistible in the heat. Perhaps it’s a case of the body craving what it needs. Or perhaps it is just that weakness for salt.
In cooler weather I love sipping dry Amontillado sherry – nutty, mellow, but still with that instantly recognisable tangy, salty core. Of course, certain malt whiskies have a briny undercurrent. Talisker, with its peat smoke and iodine complexity, is a particular favourite.
Champagne can have a saline note, especially blanc de blancs; a recent treat was Ulysse Collin Extra Brut served as a seductively tingly apéritif. Safely tucked away for the future, we have some Chinon from Bernard Baudry with an enticing salty minerality that works deliciously with Cabernet Franc’s hard graphite edge. I cannot wait to see how it evolves. And I couldn’t possibly leave out Thalassitis (‘of the sea’) by Gaia, an arresting white wine from the volcanic island of Santorini. All profoundly and hauntingly satisfying.

More salty tales will follow, probably accompanied by something a little less virtuous in my glass...

(The image is of a driftwood tree on Harbour Island in the Bahamas where we spent some of our honeymoon.)
Posted by Lucy Bridgers at 04:53 2 comments: