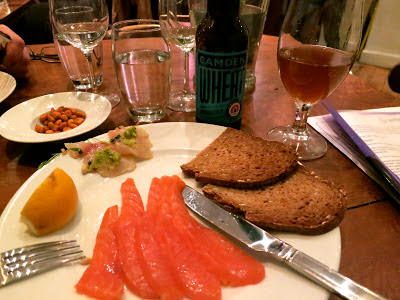 As a north Londoner, I felt a bit sad when I heard that Trojka in Primrose Hill was closing. It had real personality and an earthiness that's become rare in a part of London that has become self-consciously cute. Anyway, I hadn't thought about it much until I recently heard about Greenbury Café which has opened on the site. The name comes from the fact that Primrose Hill was once known as Greenberry Hill after the notorious hangings of Green, Berry and Hill who had plotted against Charles II.

What made my ears prick up was the realisation that Morfudd Richards is the force behind the Greenbury Café. Over the past couple of decades or so, Richards has been closely involved in the London restaurant scene, working at Marco Pierre White's Harvey's and for Chris Corbin and Jeremy King at The Ivy and Le Caprice (Fay Maschler's piece about her here reads like a potted modern history of the London restaurant scene). She went on to open Lola's in Islington in the 1990s where chefs included Juliet Peston (sister of Robert) and Hywel Jones. I lived nearby and just loved Lola's for the way it combined excellent food and drink with a warm, relaxed and welcoming atmosphere. Unlike many restaurants at the time, it was never up itself.

So, I was delighted to hear about Greenbury Café. It's open all day and the eclectic menu takes in British delicacies (even from London), interesting global dishes (Imam Bayildi, kitchari), charcuterie and comforting classics like eggs benedict, salt beef sandwiches and steak and chips. The drinks list is equally varied, offering an array of sherries, craft beers, imaginatively chosen wines and proper grown-up soft drinks. The coffee sounds great too, using a specific blend called 'Baron' from Climpson and Sons.

For my starter I really got into the local vibe and had Stoke Newington smoked salmon with soda bread and Camden Wheat Beer (see pic above). You'd never expect it, but this turned out to be a terrific combination. My friend Neil had sea bream ceviche, passion fruit and avocado – zingy and appetising and fabulous with Tim Adam's Fairfield Block Single Vineyard Semillon. I stuck with fish for my main course – roast cod, herb and olive quinoa, tamarind purée, and the Semillon hit the spot again. Neil chose a lamb dish from the daily specials and a glass of gutsy Jumilla. We couldn't resist pudding, so Neil had some of Morfudd's home-made vanilla ice cream with Pedro Ximenez poured over and I had roast and raw pineapple, pain d'épice, coconut and limeleaf sorbet (with a glass of Arneis Passito). All excellent. 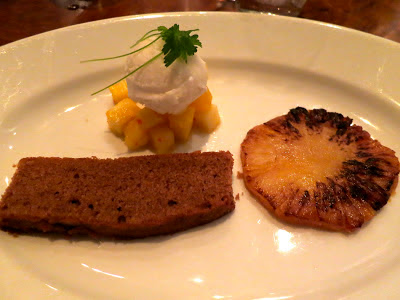 Our bill came to about £90, eating à la carte, but they offer a prix fixe during the week for lunch and dinner: £9.50/£11.50 for two/three courses. As it is open all day, I presume you could pop in for whatever you fancy or perhaps stay put and work your way right through the menu. Now that's a thought...

Posted by Lucy Bridgers at 09:43 No comments: 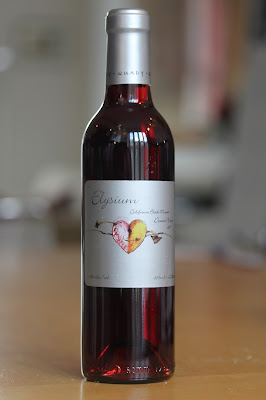 I've always had a soft-spot for sweet wine specialist Andrew Quady's quirky range, especially his Black Muscat, Elysium. Here in the UK you don't often see these Californian wines, but I came across Elysium last week in a local off-licence (the Bottle and Basket in Adelaide Road near Chalk Farm tube station). Noticing the heart on the label, I just had to grab a bottle for Valentine's Day.

Elysium is a truly pretty wine with seductively perfumed juicy red fruit and that gorgeous ruby colour. What's more, at 15 percent ABV, it is one of the few wines that's comfortable with chocolate. This evening we'll be having it with gooey chocolate puddings with cherry compote. Can't wait. 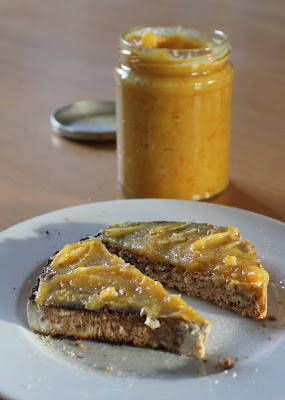 At this grim, energy sapping time of year, citrus fruits really help perk you up, with those fresh tangy flavours and all that Vitamin C. With my annual batch of marmalade out of the way, I was flicking through a magazine and a recipe for orange curd made my mouth water. I was also making a birthday cake for a friend and it seemed the ideal filling. 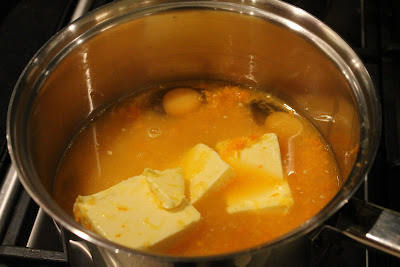 The recipe (from the January issue of Waitrose Kitchen) suggested Seville oranges, but I'd used up all mine in the marmalade, so used Navel oranges instead. The directions were quite straightforward. Place all the ingredients in a large saucepan: the zest and juice of 3 oranges and 2 lemons, 4 large eggs, 350g caster sugar and 225g unsalted butter, cubed. Heat the pan gently to melt the butter and beat with a whisk to combine the ingredients, then allow the mixture to gradually thicken, still whisking, until it is thick enough to coat the back of a spoon. In my case, this took a lot longer than the suggested 10 minutes and I had to keep changing hands. It was quite a workout. A bit more whisking was required as it cooled down. Finally, pour the curd into a couple of warm, sterilised jars, seal and store in the fridge. This recipe suggests using the curd within a week, but, as I'd cooked mine for so long (more than half an hour), I'm hanging on to it for a bit longer – I'm enjoying it as a breakfast treat on toast and might throw together an orange meringue pie inspired by my adaptation of the River Café's lemon tart my husband occasionally makes.

Since making the orange curd, I've consulted other recipes and several suggest stirring, rather than whisking which I'm prepared to try next time to save energy. Nigel Slater feels that using a whisk makes the curd lighter and more wobbly. Leith's in their Cookery Bible use a wooden spoon and Pam Corbin in the River Cottage Handbook on Preserves whisks the mixture together and then stirs it until it thickens, as does Marguerite Patten in Jams, Preserves and Chutneys who also points out that you shouldn't cook the curd for "too long" as it continues to thicken once it has cooled down.

Whichever way works best for you, homemade orange or lemon curd is a fabulous winter treat (particularly if followed by a back and shoulder massage if you choose to whisk it).
Posted by Lucy Bridgers at 03:53 3 comments: