As a long-time wine professional and complete wine nut, I am delighted that a notable independent wine merchant has opened a short stroll from my home. Not only has a decent new shop opened in our neck of the woods, but it sells wine!

This rather glamorous, thoughtfully run shop sells a broad range of interesting wines, spirits and beers, often too off-beat to be found on supermarket shelves. What's more, they showcase their range with regular evening wine tastings. As the name suggests, it is run with theatrical flair and exuberance.

Owner, Daniel Illsley used to be an actor but became disenchanted and in the late 1990s gravitated to Oddbins (where I started my wine career a few years earlier). Soon he was managing the Greenwich branch before launching Theatre of Wine nearby in 2001. A decade on, he decided to expand north of the river and, last December, opened a branch in Junction Road, having realised that Tufnell Park, Archway and Dartmouth Park form somewhat of a black hole as far as decent drinks shops are concerned.

The eclectic range offers a good potted selection of European classics and a discerning en primeur offering, but Theatre of Wine comes into its own with lesser-known, quirky wines. As I write this I am sipping a glass of Casa Lapostolle Semillon 2007 from Rapel Valley in Chile, from low-yielding old vines – rich and concentrated, with an almost waxy texture, stony and sweetly spicy. It's a big, satisfying mouthful of wine and, at £9, a distinctive bottle to serve at or take along to a dinner party. I'm looking forward to tasting some of their wines from Germany, Austria, Greece, Italy, let alone an apparently Chablis-like Georgian wine (Tbilvino Tsinandali £10.90). Often overlooked wines from provincial France also appear to be well represented.

If your new year's resolution has been to reduce your alcohol consumption, decent local independent merchants like Theatre of Wine give you the chance to trade up a bit and focus more on quality, rather than quantity. Your palate and your liver will thank you.

A couple of classics and an attempt at a balanced diet

I'm afraid I'm being a bit self-indulgent here by reliving a couple of recent meals. Last Thursday I had the privilege of cooking an absolutely magnificent t-bone steak – a perk I'd received the previous day, when I helped out at a rather meaty photo-shoot. Consequently, on Friday night, we opted for something a little lighter –  cheese soufflé. Which did I enjoy most? It was a close thing, but I'd have to say it was the steak – an awesome piece of meat, beautifully tender with deep, complex flavours (the fillet side was surprisingly flavoursome and gamey) and perfect for sharing. 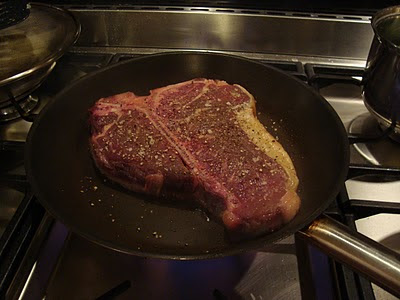 We enjoyed the steak with potatoes sautéed in duck fat with rosemary and some broccoli. I seasoned the meat generously with Maldon salt and black pepper and there was no need to used any oil the pan. 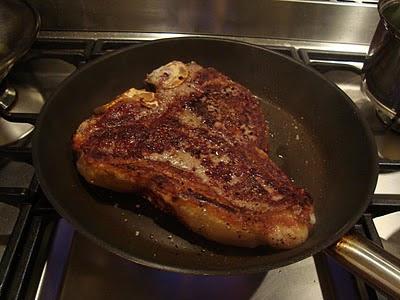 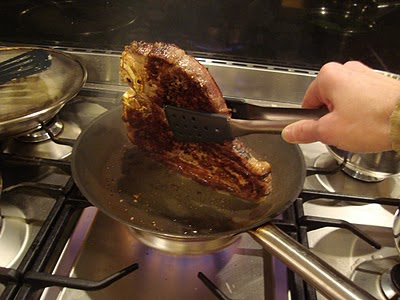 As the steak was nicely thick, I made sure the fatty edge had the chance to colour up and render. I had boiled the potatoes first and given them a good shake to roughen them up (chuff them) before frying. 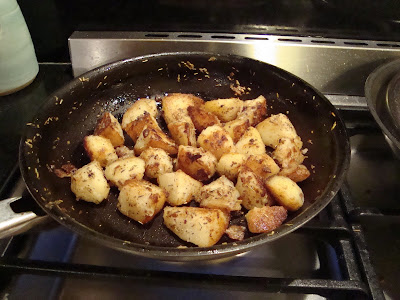 A bottle of youthful, vigorous Jones Rouge from the Languedoc provided some tannic grip and succulent ripe, spicy fruit. 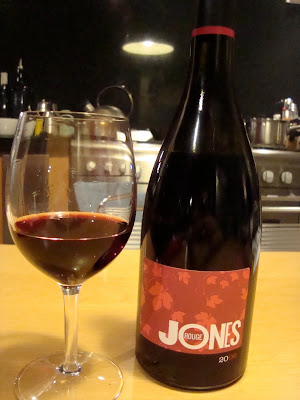 Such was my reverence for this beautiful piece of meat, at the end of the evening I couldn't resist photographing the stripped bone. There was something powerfully arresting, dark and pagan about it that really caught my imagination (or perhaps it's just me being a hard-core carnivore). 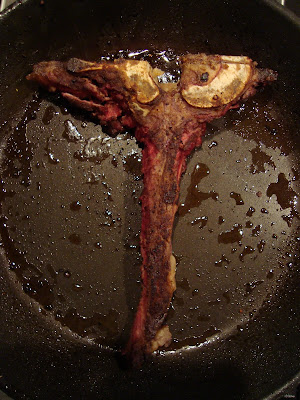 After such a meat-fest, on Friday we needed something a little lighter (and preferably meat-free). Cheese soufflé seemed a sensible choice. I cook this on quite a regular basis and have always got good results following the clear recipe in the Leith's Cookery Bible. Friday's soufflé was particularly cheesy as I used up some Keen's Extra Mature Cheddar that we'd had since Christmas. It wanted using up and was great to cook with. A well-dressed mixed salad would make an easy and refreshing accompaniment, but we kept things simple and roasted some tomatoes in the oven at the same time as the soufflé. A bottle of Valpolicella Ripasso worked well with the cheese and tomato flavours, its fresh acidity standing up nicely to the eggy richness. 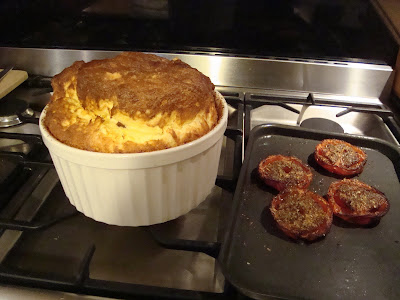 Preheat the oven to 200°C/gas 6. Melt a knob of the butter and brush a 20cm soufflé dish with it. Lightly dust with the breadcrumbs.

Melt the remaining butter in a saucepan and stir in the flour, mustard and cayenne pepper. Cook for 45 seconds. Add the milk and cook, stirring vigorously, for 2 minutes. The mixture will get very thick and leave the sides of the pan. Remove from the heat.

Stir in the cheese, egg yolks, salt and pepper. Taste; the mixture should be very well seasoned.

Whisk the egg whites until stiff but not dry, and mix in a spoonful into the cheese mixture. Then fold in the remainder and pour into the soufflé dish, which should be about two-thirds full. Run your finger around the top of the soufflé mixture. This gives a "top hat" appearance to the cooked soufflé.

Bake in the preheated oven for 40 minutes and serve immediately. (Do not test to see if the soufflé is done for at least 30 minutes. Then open the oven just wide enough to get your hand in and give the soufflé a slight shove. If it wobbles alarmingly, cook for a further five minutes or so.)

Back to basics: some tips to help you feel less intimidated by wine

Unfortunately, as wine is such a huge subject and riddled with traditions and ceremony, most people still find it quite intimidating. Going back to basics, here are a few tips that might help enhance your drinking: 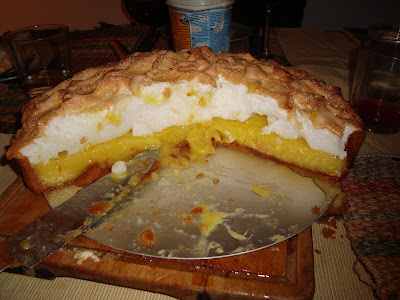 My husband Nathan has a soft-spot for lemon tart, especially the River Café version, and cooks it beautifully. It is gorgeous – the buttery richness balanced by clean, intense citrus flavour and, yes, lemon tart does have a restrained, chic quality.

However, secretly, I've always preferred lemon meringue pie, in spite of it being a bit brash and outmoded. Perhaps it's because I'm a child of the 1970s and it reminds me so much of family meals and holidays; there was a restaurant where we were taken as a special treat in Albufeira on the Algarve that served a magnificent version, crowned by a three-inch high meringue. I have always wanted to emulate this and recently the opportunity arose. Over the Christmas holiday we were visiting family for dinner and offered to take along a pudding. So, once Nathan had completed his River Café tart I relieved him of the egg whites (all 12 of them) and, with the help of my new Kenwood Chef, attempted to gild the lily. 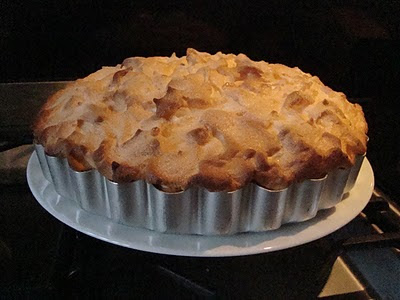 Firstly make the pastry. Pulse the flour, salt and butter in a food processor until the mixture resembles coarse breadcrumbs. Add the sugar, then the egg yolks and pulse. The mixture will immediately combine and leave the sides of the bowl. Remove, wrap in clingfilm and chill for at least an hour. Preheat the oven to 180°C/gas 4. Press the pastry into 30cm loose-bottomed flan tin, bake blind and leave to cool.

Meanwhile make the filling. Put all the ingredients except the butter in a large saucepan over a very low heat, and whisk until the eggs have broken up and the sugar has dissolved. Add half the butter and continue to whisk. At this point the eggs will start to cook and the mixture will coat the back of a spoon. Add the remaining butter and continue whisking throughout the cooking process to prevent the mixture from curdling. Remove from the heat, place on a cold surface and continue to whisk until lukewarm. Raise the oven temperature to 200°C/gas 8. Spoon the lemon filling into the pastry base and bake for 5 minutes until set. Remove the tart from the oven and set aside.

Finally, whisk the egg whites until stiff. Continue whisking while gradually adding the sugar. The egg whites should now be stiff and glossy. Spread the meringue over the tart, taking it right to the edge to cover it completely. Dust with the remaining caster sugar. Return to the oven for about 15 minutes or until golden brown. Remove from the oven, allow to cool slightly, serve and wonder why it's been so long.

To further spoil yourself, pour over some chilled double cream and enjoy with a glass of suitably frothy Moscato d'Asti – refreshing and grapey. Lemon meringue pie may not be retro chic, but it's certainly retro glamour.

PS While we were finishing off the pie, we were watching the televised version of Nigel Slater's autobiography, Toast which made me feel even more proud of our efforts! It reinforced what a sense of occasion can be conjured up by this old classic. 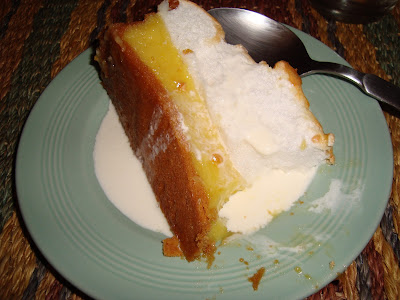 Posted by Lucy Bridgers at 10:38 No comments: