This recipe is based on one by Richard Corrigan that appeared in Waitrose Food Illustrated (as was) and I think it must have been the November 2009 issue. I cooked these soufflés on New Year’s Eve last year and they went down extremely well. The recipe is sufficiently festive, but with a grown-up dinner party feel – a really useful dessert for this time of year (and quite manageable as it can be prepared in two stages). I made them again recently to use up the final chunk of last year's Christmas pud that had been lurking in the freezer. Again, the soufflés were fabulous.

For the soufflé base, in a large bowl whisk together three egg yolks and 50g caster sugar until thick and creamy.

Meanwhile, heat the milk and vanilla pod together in a pan until boiling. Whisk all the flour into the egg-and-sugar mixture before adding the milk, still whisking as you pour. Remove the vanilla pod. Pour this mixture into a large saucepan and stir over a gentle heat until thickened. Stir in the crumbled Christmas pudding and leave to cool – this can be done the day before if you refrigerate the mixture until you are ready to cook the dish.

To make the soufflés, preheat the oven to 240°C/gas 8. Brush eight 8cm ramekins lightly with butter. Chill for five minutes. Brush with more butter, then dust evenly with the remaining 15g caster sugar.

In a large bowl, whisk the egg whites to form soft peaks. Beat half the whisked egg white into half the soufflé base, then fold in the remainder of both mixtures. Spoon into the ramekins, smooth over the tops with a knife and cook for seven to eight minutes, until risen.

Dust with icing sugar (although recently, when these pictures were taken, I didn't bother). 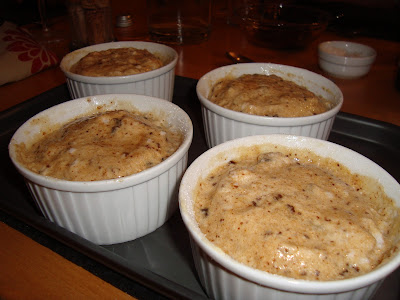 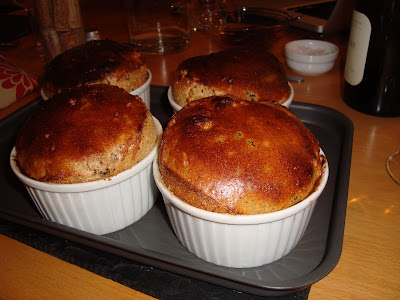 The original recipe points out that at Corrigan’s restaurant, the soufflés are served with an Irish whiskey-flavoured ice cream. This prompted me to serve them with generous glasses of Baileys – absolutely gorgeous! You could also serve them with some good quality malt whisky with a splash of water (as suggested by Waitrose Food Illustrated). You can see from the picture below that I was tempted to try some treackly Pedro Ximenez with them, but ended up sticking with the Baileys. 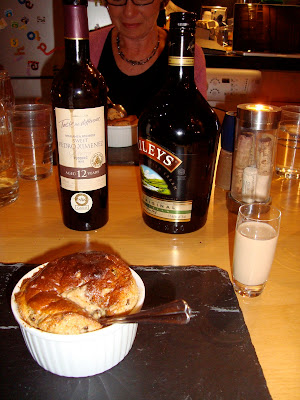