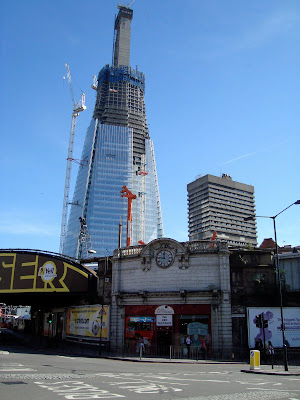 Yesterday I heard some particularly sad news – the Notting Hill Gate branch of Oddbins was due to close last night. Oddbins has been in a fragile state for some time and a few weeks ago went into administration. However, the closure of its probably most iconic branch is particularly moving.

Later this year I will be celebrating 20 years in the wine trade. I started my career as a graduate trainee at Oddbins in High Street Kensington, a short distance from the flagship Notting Hill branch. As now, we had been in recession and I was thrilled to have been appointed by what was, at the time, probably the world's most exciting and distinctive wine merchant. It certainly wasn't the salary (or the hours) that had attracted me to Oddbins, it just seemed, without question, the best place to begin a career in wine. The staff-training was exemplary and, of course, there was that enormous, eclectic range. As a recent graduate, it was the perfect place to start full-time employment. The atmosphere was casual (even subversive); you worked hard, but you played hard, too, and almost always with like-minded people, crazy about wine. It was thrilling working for Oddbins during its pomp and it has informed a great deal of what I have done since.

The Notting Hill Gate branch played host to our staff tastings – memorable because of the wines and the huge characters often present. The branch represented the peak of achievement within the company – the manager was better paid than most head office staff because of the continually successful sales figures – so it attracted some charismatic individuals. It was an exciting time. In the early 1990s London felt like the centre of the wine world and Oddbins was at its beating heart. In those days Oddbins was owned by Seagram and, as long as we sold a certain proportion of their products, the business remained viable.

There was a trade-off. Working at Oddbins became your life and you need to be tough (physically and mentally). Being a retailer, the hours were exhausting, but exacerbated by being an off-licence. Most branches didn't close until 9pm and were obviously open at weekends, and Christmas was the busiest period. That would be tiring enough but, being a key-holder, I would occasionally be called by the police in the middle of the night because the shop alarm had gone off. Sitting in the Camden branch on my own in the early hours with a gaping hole in the window wasn't much fun (with colourful nocturnal street-life ensuring you didn't nod off). Someone had to be there until the glaziers arrived the following morning! One busy Saturday afternoon when I was in charge of the shop the IRA set off a bomb across the road hidden a litter bin outside McDonalds. That was truly terrifying. A few months later once I had moved to the attractive Charlotte Street branch (gorgeous location and closed on Sundays) I was held at gun-point while alone in the shop with a customer on a sunny Thursday morning. Our attackers didn't get away with much as I couldn't remember where the safe key was kept (I'd just started working there), so they only took some notes from the till, cartons of cigarettes and some bottles of spirits and Champagne. Terrifying again, but pointless and pathetic. They committed 19 similar offences and went to prison for several years. These experiences demonstrate the extent to which working in retail makes you vulnerable.

Despite all the delicious perks and entertaining, knowledgeable colleagues, it was good to move on. I left Oddbins to join André Simon, the retail arm of Layton's (now Jeroboam's). I was only there a few months before quitting retail entirely to join Mitchell Beazley book publishers. For so long Oddbins led the way, attracting the most enthusiastic staff and offering a genuinely innovative range. Things have changed dramatically over the past 20 years, with wine retailing increasingly polarised between supermarkets and specialist merchants, leaving the high street "offie" struggling in the middle ground. I'm keeping my fingers crossed for the future of Oddbins in some form and hope it stands a realistic chance of competing in this challenging marketplace.

The photograph is of the London Bridge branch, overshadowed by the Shard. I took the picture as I left the Big Fortified Tasting as it was such a powerful image of the old and the new.
Posted by Lucy Bridgers at 14:19