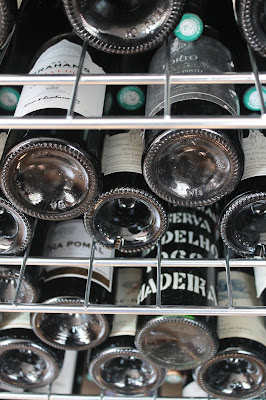 Yes, it's something we all might aspire to, but here I'm referring to my collection of wine. Languishing in my Liebherr wine cabinet are about 200 bottles at varying stages of evolution. It's probably a bit like a bookcase or CD collection in what it says about me and my personal taste (and my husband's, which conveniently chimes with mine). It also reveals where we've spent our holidays, as many have been bought directly from the producers – I can't think of a more evocative souvenir. We also have wines from our daughter's birth year and wines received as wedding gifts. There are also some from my birth year. I had some clarets (which were drunk at my 30th), but now only have fortifieds which should be bearing up okay after more than four decades.

My wine also represents a part of my emotional life as some bottles date from previous relationships and memorable experiences. They are an important part of my life. It's almost a maternal affection I have for them. They have their own personalities and I'm looking forward to seeing the effect time has on them. They aren't all for long-term keeping; some will evolve more quickly than others and some just benefit from being tucked away for a year or two to flesh out.

If you love wine, laying it down for the future makes a lot of sense – as long as it's stored in the correct environment. My wine collection has passed through a few homes – a couple of cellars (the first was damp, so I didn't take the same risk with the second and had it tanked). Our current home doesn't have a cellar, so we invested in the cabinet. Another option is to have it stored for you. Wine merchants can often arrange this, but my top recommendation for this would be The Wine Society.

And, unless you're following Robert Parker's ratings, buying en primeur needn't just be for the super-rich. After visiting the château as an MW student, I bought some La Tour Carnet 2001 en primeur which has been drinking deliciously for a number of years and we still have a few bottles left. It cost about £12 per bottle. I'm not looking to trade my wine, so value for money, rather than prestige, is our overriding concern. We still have some burgundies from the 1990s and some other rather grand older wines that still give us great pleasure and really help make an occasion, as well as many more lesser-known wines that hold special memories that are just as enjoyable. However, it's important to taste your wines regularly – eg every six months to a year – you want them to age gracefully and pleasurably – not to wither and decompose into some rather expensive vinegar. Now that would be undignified.
Posted by Lucy Bridgers at 04:27