I've finally had my first experience of an underground restaurant. I'd been tempted for a while, but had been warned that some can be a bit chaotic, resulting in a very late night. I resisted until becoming aware of somewhere truly local.

It turns out that Holloway in north London is graced by the presence of super-foodie, James Ramsden and the supper club he runs with his sister. He was planning a game dinner which he organising with another culinary luminary, Oliver Thring. Perfect – it was autumn, I adore game and live within walking distance. My husband was keen, too, and we had some nice mature Burgundy to take along. Everything fell into place. 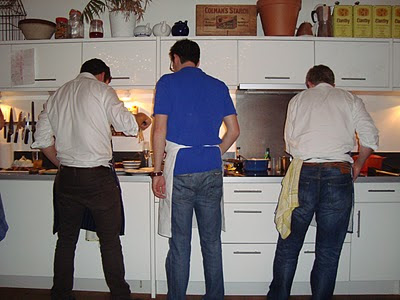 We arrived at the spacious flat in time for a Moscow Mule cocktail and a chat with fellow diners and were impressed by the level of buzzy activity in the kitchen. It already felt reassuringly professional and efficient. We already knew what was on the menu: teal salad, roast partridge and poached pears, but James had mentioned earlier in the day that we were also to be treated to celeriac soup. 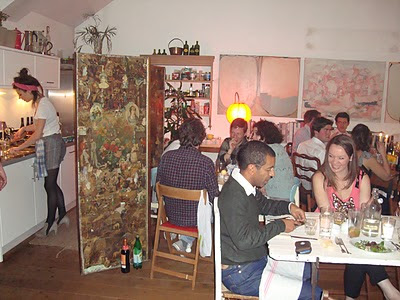 We were seated and dinner was served by a very able team of helpers. There were 18 diners/guests and everything was handled quite expertly in a large open-plan room. I found the experience odd, but in a good way, as it was like being parachuted into a dinner party surrounded by people you didn't know. They were generally chatty and friendly and the other guests on our table were lively, interesting company. The pervading atmosphere was relaxed and gently convivial, but noisy due to all the hard surfaces. We were surprised that a number of guests had travelled from distant parts of London (but probably didn't have to rush home to relieve babysitters). 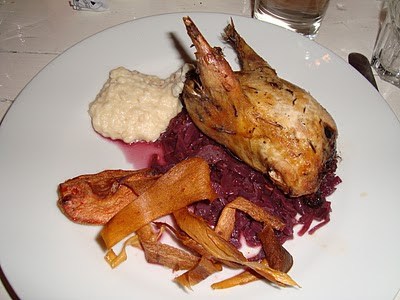 The food was great. The celeriac soup was velvety and warming – truffle oil adding a further touch of luxury. The teal salad was a well balanced combination of freshly dressed leaves and tender, complex, gamey meat, although I could have done with a larger portion (or perhaps that's just me being greedy!) One of the bottles we had taken along was Pierre Bise Savennières 2001 which went surprisingly well with it and was a hit with the rest of the table who were surprised that such a mature wine could taste so fresh. The partridge was particularly good. The root vegetable 'game chips' and bread sauce were delicious trimmings and the red cabbage included orange that really helped lift the rich flavours and textures. Our bottle of Roumier Chambolle Musigny 1996 was just the ticket. My neighbour at our table had brought along some Mount Difficulty Pinot Noir – a stella example of the variety from New Zealand. It was fascinating comparing the two wines and with such appropriate food. Quite a treat. This was in spite of the chunky tumblers provided – I asked for another glass so I could have two wines on the go and received a proper one with a stem which did make a difference. Would it be rude to take your own glasses to supper clubs? I wonder. 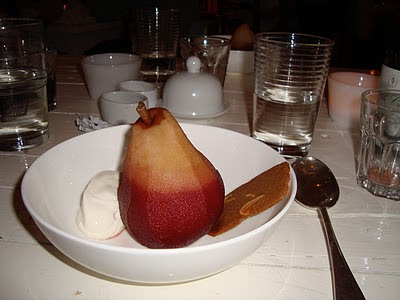 The poached pear looked stunning and was tender and deeply flavoured, served with a dollop of crème fraîche and an almond biscuit. Very chic. James then circulated with some home-made sloe gin and coffee and herbal teas were offered. These were enjoyed with chocolate truffles, biscotti and some gorgeous marshmallows studded with raspberries. 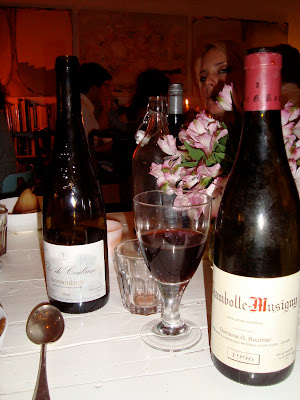 It was a really fun and different night out. I look forward to seeing what other dinners James, his sister and the rest of the team have in store.

http://jamesramsden.wordpress.com/the-secret-larder/
Posted by Lucy Bridgers at 06:20