A taste of Californian history

A haunting and compelling aspect of wine is how it can put you in touch with the past. You can literally taste the past when you open an old bottle of wine; I once had the unforgettable privilege of enjoying a few sips of Bual Madeira from 1900 – even the drained glass smelt exquisite. Old vineyards also have their share of mystique and can transport you back in time. Particularly so in Europe whose wine culture dates back to before Roman times – some places have an almost magical aura. The sight of old vines is arresting – gnarled and weather-beaten and strangely contorted as though writhing in a primal dance. There is something thrilling about communing with the past in such a tangible way. 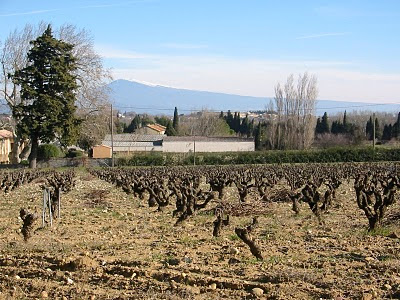 Vines near Châteauneuf-du-Pâpe with Mont Ventoux in the background
Recently I was starkly reminded of this. I was fortunate to attend an event with Californian Zinfandel specialist, Joel Peterson of Ravenswood, who led us through a selection of his wines, some from vines dating back to the 1880s. Zinfandel was one of the first grape varieties to be introduced to California in the 1850s. In the Oxford Companion to Wine Jancis Robinson describes old Zinfandel vines as "one of California's great viticultural treasures", specifically in reference to 80-year-old vines. I've always been a fan of Zinfandel (as a full-throttle red, rather than an insipid rosé), so it was a treat to taste such high-quality, site-specific examples.

The first single vineyard wine Peterson introduced us to was Barricia which hails from a 36-acre site in Sonoma's Valley of the Moon district. The vineyard is planted with Zinfandel and Petite Sirah and dates back to the 1840s when General Mariano Vallejo (Mexico's military commandant for Alta California) traded it with his children's music teacher in exchange for piano lessons; it was replanted in the 1880s after the phylloxera epidemic. The vineyard's name is a contraction of the names of the two women, Patricia Heron and Barbara Olesen, who owned it from the 1970s until 2006, re-establishing it as a prime source of Zinfandel. We tasted the 2006 vintage: a deep, concentrated wine with complex autumnal dried fruit and tar aromas; sleek, supple tannins and was freshly balanced, despite its warm alcoholic finish (15.5°). 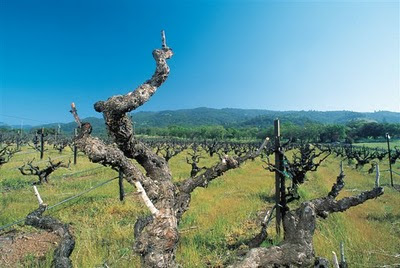 Barricia vineyard
This was followed by the single vineyard Teldeschi, also from the 2006 vintage. Teldeschi is located in Sonoma's Dry Creek Valley – the heartland of old-vine Zinfandel – and was planted between 1913 and 1919 with Zinfandel, Petite Sirah and Carignane. Tuscan immigrants, the Teldeschis originally sold grapes to Italian home-winemakers in San Francisco. It is still in the hands of the Teldeschi family who produce their own wines as well as supplying Ravenswood with grapes. The wine was slow to reveal itself but once it had opened up, the complex sweetly spicy blackberry aromas and savoury earthy undertone began to sing out. This long, satisfying wine was surprisingly fresh and balanced given the high level of alcohol (15.5°). 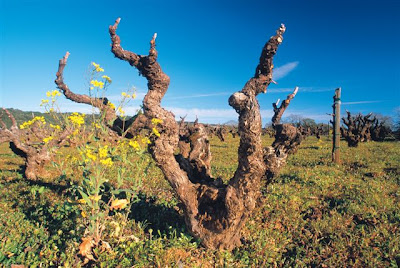 Teldeschi vineyard
While discussing these fascinating old vineyards, Peterson mentioned another intriguing site which he now owns with his son, Morgan Twain-Peterson. Bedrock, originally planted in 1854 by Civil War generals William "Tecumseh" Sherman and Joe Hooker. The vineyard was later owned by George Hearst, a mining magnate and senator whose son William Randolph Hearst was the inspiration for Citizen Kane. I find this thrilling as it demonstrates the prestige these vineyards must have held if distinctive, fiercely ambitious figures such as Hearst chose to acquire them.

We didn't sample the Bedrock Zinfandel, but I look forward very much indeed to another evocative taste of Californian history.

(We enjoyed these wines with Joel Peterson at 25°-50° Wine Workshop and Kitchen. I had duck rillettes and onglet steak which were excellent with the wines but, surprisingly, the fish dishes that were also served – confit trout and salmon with spicy lentils – were unexpectedly good. I had a selection of cheeses instead of dessert which were particularly good with the single-vineyard wines.)

Photos of Barricia and Teldeschi vineyards are courtesy of Constellation Brands.
Posted by Lucy Bridgers at 08:54